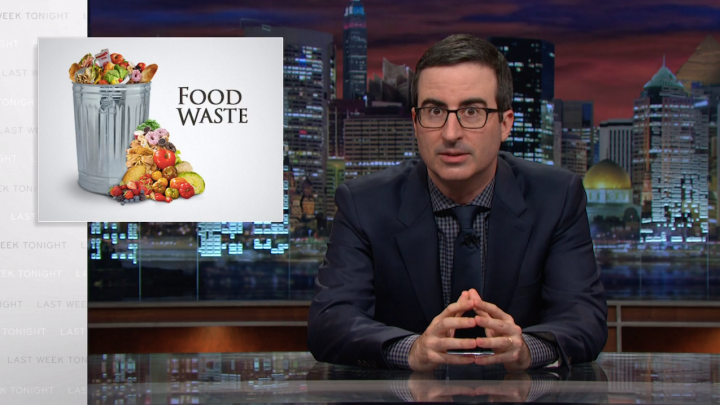 John Oliver has done an incredible job of pointing out hypocrisy around the world since his tenure on Last Week Tonight began last year, but rarely has an issue struck so close to home for so many Americans as this week’s main topic of discussion.

If you missed the latest episode of Last Week Tonight, you missed John Oliver delving into the mountains of wasted food we discard every day. A report from the National Resources Defense Council estimates that 40% of all the food produced in the United States never gets eaten. That amounts to $165 billion worth of food, which could fill 730 football stadiums.

What makes matters so much worse is the fact that nearly 1/6th of the population is classified as living in “food-insecure households,” which means that at some point in the year, they can’t effectively feed their families. On top of that, piling rotten food on top of garbage in landfills results in the creation of methane gas.

Even if you can feed your family, you are likely contributing to a worldwide issue that’s eventually going to have irreversible effects on the entire planet.

Oliver admits that he is as guilty of tossing out perfectly edible food as anyone else, but the real shame is that grocery stores and markets are just as likely to toss out food, rather than donate it to those in need. This is because:

Worst of all, the tax break that makes food donation worthwhile isn’t a permanent legislative fixture, so if the government decides not to renew the legislation, smaller manufacturers run the risk of losing significant revenue.

It’s a nightmarishly depressing issue, seemingly without any simple solution, but one worth knowing more about.

If you want to learn even more about this sweeping problem, you should check out the website of journalist Jonathan Bloom, whose voice was featured in the clip above, at WastedFood.com. You can also try to catch (or host) a screening of Just Eat It, a documentary that Oliver pulled heavily from.