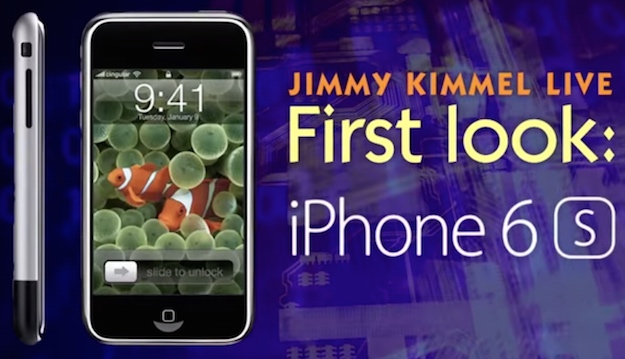 In the wake of Apple introducing the iPhone 6s, Jimmy Kimmel sent an interviewer out into the streets to ask people what they thought about Apple’s latest and greatest iPhone. Only thing is, the phone Kimmel gave to passersby on the street was an original iPhone from 2007.

As things typically tend to go with these types of Kimmel videos, people couldn’t stop heaping praise on the OG iPhone from 8 years ago.

In perhaps a telling snippet which speaks to how large the iPhone has become, one man exclaimed: “It’s comfortable, better than before. My thumb doesn’t have to stretch all the way across the country to type.”

Meanwhile, one woman chimed in and praised the camera for opening up much, much faster. She also, almost bizarrely, said that “the resolution on the screen is much sharper. Definitely.”

At the end of the video, the man who seemingly couldn’t get enough of the iPhone’s smaller screen was asked if Apple had done it again. Without missing a beat, he quickly responded, “Apple always does it again.”

You can check out the full video below.