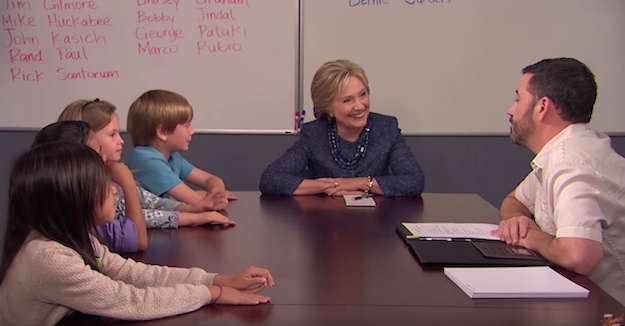 No matter what side of the political divide you happen to fall on, there’s no denying that the current run-up to the 2016 Presidential election has been an endlessly wacky, dramatic and entertaining affair. Aside from the endless stream of soundbites provided by Donald Trump (who is hosting Saturday Night Live tonight, by the way), we also have the strongest female Presidential candidate in history in Hillary Clinton. And though Clinton isn’t the first woman to ever make a run for the Oval Office, she stands the best chance of actually achieving that goal.

Now given that political pundits can drone on for hours about the Presidential election, late-night host Jimmy Kimmel recently decided to have a little bit of fun with it. In a segment that aired late last week, Kimmel sat down with a few kids to hear what they think about the prospect of a female President.

The end result, as you might expect, is some great light-hearted comedy.

DON’T MISS: BlackBerry Priv review roundup: Some love it, some hate it, but ‘too little too late’

At one point, one of the boys explained that a female could never be President because “they’re too girly, they’ll make girl rules.” When Kimmel followed up, the boy explained that she’d probably hand out free makeup in the dressing rooms, prompting another boy to add that a female President is liable to decorate the White House and might even paint it pink.

Eventually, Hillary Clinton even dropped in to surprise the kids. All in all, it’s an entertaining segment that’s worth checking out.