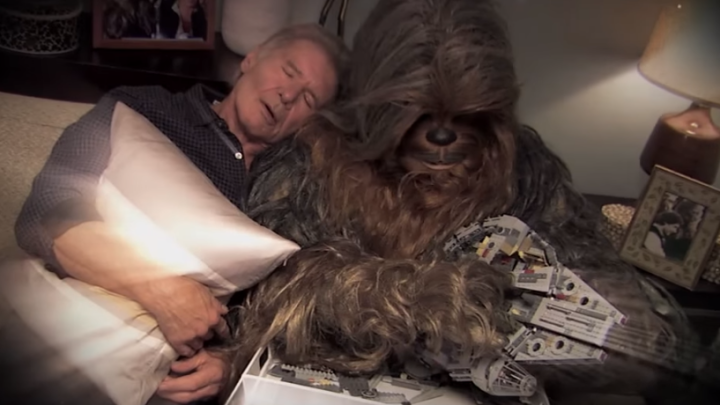 Did you know that Chewbacca and Harrison Ford apparently haven’t been on speaking terms for years? Well, that’s what Jimmy Kimmel would like you to believe in a Star Wars-related sketch he aired this week that involved Ford and everyone’s favorite wookie reconciling after years of bitterness.

So why did Chewbacca and Ford have a falling out? Apparently it Chewie stole away Harrison Ford’s wife or something to that extent. At any rate, when a depressed Chewbacca climbs up on top of a roof and contemplates suicide, Ford is suddenly overcome with a rush of happy memories the two shared together, including sharing a beer, playing Connect 4 and getting pedicures. It’s completely ridiculous and is of course accompanied by the bittersweet melody of Adele’s “Hello.”

In the end, Chewie comes down off the ledge and he and Ford share a big bear hug… or is that a wookie hug? At any rate, check out the whole bit below.