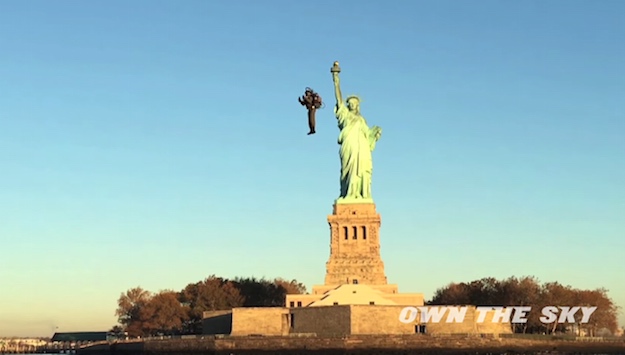 The age of using personal jetpacks to effortlessly zip through the sky, once solely the purview of science fiction, appears to be closer than ever before. While not everyone can, or will ever be able to, take to the skies and soar over the Dubai skyline alongside a passenger plane, using a personal jetpack to fly around the Statue of Liberty is certainly much more doable.

Last week, Australian adventurer David Mayman used a personal jetpack to fly over the Hudson river and zoom around the Statue of Liberty. The jetpack Mayman used, called the JB-9 JetPack, can travel at a speed of 63 mph and was developed by Jetpack Aviation, a company that has been researching high-powered jetpacks for decades now.

Video of the JB-9’s maiden voyage, which was conducted with approval from both the FAA and U.S. Coast Guard can be seen below.

According to the company website, the JB-9 is “inherently stable but also capable of very dynamic maneuvers thanks to our approach to engine vectoring.” The company also boasts that its next-gen jetpack, the JB-10, will be able to reach an altitude of 10,000 feet, fly through the air at speeds greater than 100 mph, and will be able to stay airborne for approximately 10 minutes.

While there’s no word yet on when the JB-10 might see the light of day, the JB-9 still seems pretty impressive in its own right.

As for jetpacks that will likely never be available for personal use, you can’t get any more impressive than the video below which features 121 pound personal jetpacks (though they’re more like rockets) armed with four engines capable of producing upwards of 50 pounds of thrust. The video features noted aviation enthusiast Yves Rossy and his protege Vince Reffet soaring like eagles through the sky.