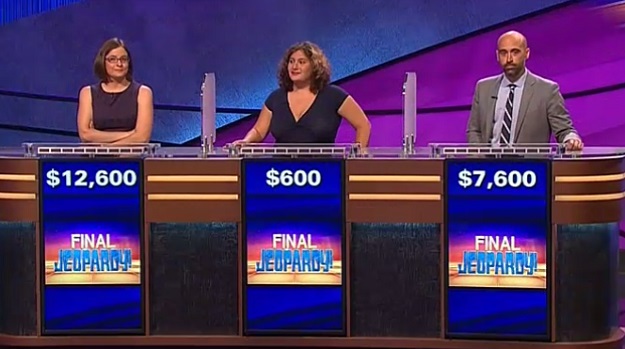 A Jeopardy! contestant this week hilariously tricked Alex Trebek into saying the name ‘Turd Ferguson’ on the air during the show’s Final Jeopardy round.

Going into the final round, a contestant named Talia was in third place with just $600 to her name. The other contestants, meanwhile, were sitting pretty with respective winnings of $12,600 and $7,600. With no real chance to emerge victorious, Talia decided she might as well have a little bit of fun instead of actually trying to answer the question.

Setting the stage, the final category was “Oscar-nominated songs” with the accompanying question reading as follows: “This song from a 1999 animated film about censorship had a word censored from its Oscar performance.”

In a stroke of brilliance, Talia wrote down the following: “What is the love ballad of turd ferguson.  PS hi mom :)”

Now you might be wondering — who or what in the world is ‘Turd Ferguson’? Aside from sounding hilarious, the phrase was originally coined on a classic SNL Celebrity Jeopardy! sketch featuring Norm MacDonald doing his famous Burt Reynolds impression.

For those who recall the original SNL sketch, Reynolds changed his name to Turd Ferguson for no good reason, which later resulted in the following exchange after Reynolds buzzes in to answer a question.

And just like that, a parody version of a Celebrity Jeopardy! sketch from a few years ago finally makes an appearance on the real show.

A hilarious moment in game show history, to be sure.