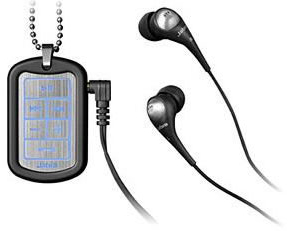 As suppliers of news to the Royal Court of the Doggfather, we thought there should be something which had both street cred and tech cred. We’re in luck, because Jabra made us look no further than the BT3030. The BT3030 is no ordinary stereo Bluetooth headset, and it doesn’t bother to look like it. It looks like a dog tag, which means you can hang it around your neck. Hot, right? On the side of it, you can switch headphones, and the keys on the front light up in blue. Here comes the part you can use if you have a possé. First of all, it has a reach of 10 meters, and that means that you don’t have to carry your phone, your people can carry it for you. Second of all, it supports two devices at the same time. And what’s more pimp than having one really cool phone?  Having two. If you’d like mo’ info, then it gets you 7 hours of music playback, 8 hours of talk, and 230 hours of stand-by time. Just don’t tell the homies in the hood, ’cause this is our secret.