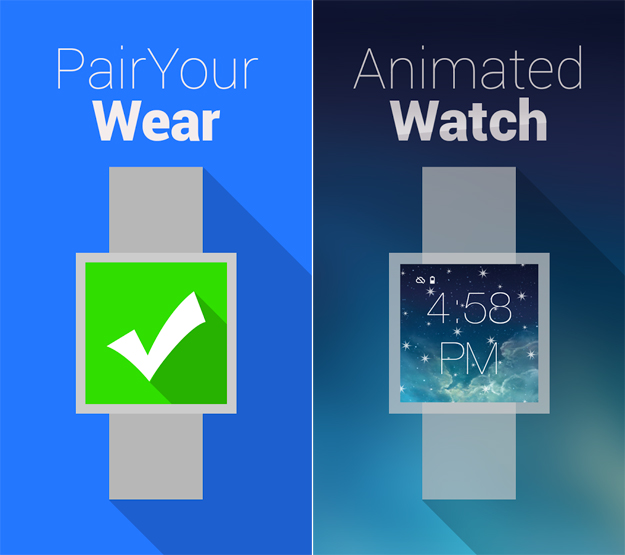 Apple’s upcoming first foray into the emerging wearables market is expected to launch this coming October, and numerous reports suggest it will be called the “iWatch.” With a focus on notifications as well as health and fitness tracking, the device will seemingly be a lot like smartwatches that are already on the market, but likely with some added design flair that only Apple can deliver. Of course, there will hopefully also be some extra functionality mixed in, considering the fact that current smartwatches don’t offer very much in the way of truly compelling features.

But if you happen to have an Android Wear watch already or if you’re buying one soon, you don’t have to wait to get an “iWatch.”

Developer MKIISoft released a free Android Wear app late last week called “iWatch” that is mildly interesting in that it marked the first time an animated watch face was made available for Android Wear. Beyond that, you’re probably better off waiting for the real thing.

Most amazing animated watch for your wear device!

Animated iWatch for all the square wear devices available for FREE!

ATTENTION – Instructions:
-Make sure your mobile is compatible with Wear.
-Make sure to pair your phone with Wear with the Wearable App.
-Ones you install the App with a pair Wear the “Wear Calc” would automatically install in your watch.
-To open: Hold on main screen for 1 second long and you would be able to select this watch face.
-You CANNOT OPEN the app in your mobile after install it, only on your Wear Device.