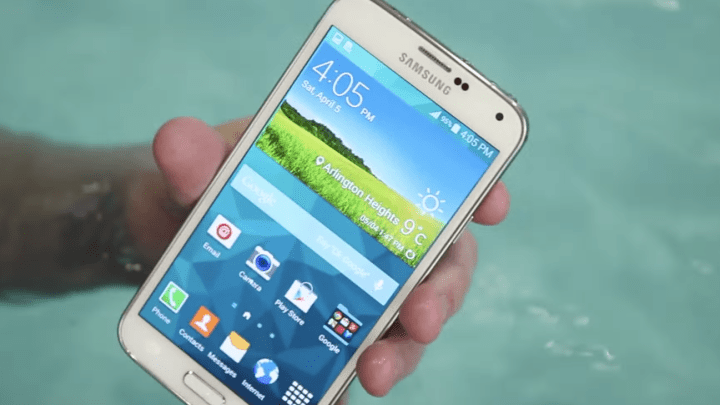 In the video, TechSmartt dropped the Galaxy S5 into a pool’s shallow end at let it sit there for roughly an hour before hoisting it up. Incredibly, the Galaxy S5 still worked perfectly well afterward and the only noticeable problem with the device was that its display didn’t respond as well to touch commands because it was covered in water droplets. This means that you can conceivably take a bath or even go swimming with your Galaxy S5 if you want and not have to worry about it breaking or electrocuting you.

Next up, TechSmartt stuffed the Galaxy S5 into a pair of jeans and put them both into the washing machine for a 50-minute cycle. Unlike the pool test, the Galaxy S5’s experience in the washing machine was not perfect: TechSmartt had to pull the device out for a little bit to open up its rear shell and get a little bit of water out that had leaked inside. However, once it got this water out and rebooted the phone, the device worked perfectly again. Amazingly, after the full cycle finished, the Galaxy S5 still ran just as well as it did when it come out of the pool.

This is the second major torture session that TechSmartt has put the Galaxy S5 through in recent days. Last week, TechSmartt dropped the Galaxy S5 from 10 feet in the air and then ran over it with an SUV and the phone still worked perfectly fine.