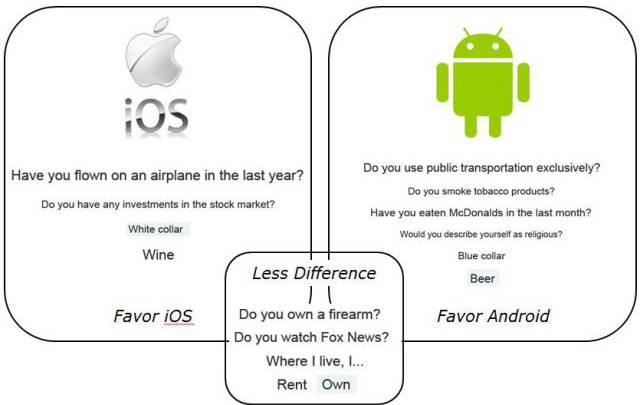 A new study looking at iPhone and Android users reveals that iOS device owners are likely to have flown at least once in the past year, own stock and prefer wine to beer, Re/code reports. Meanwhile, Android users are more likely to take the bus, have eaten at McDonalds last month, and prefer tobacco and beer. Android users also describe themselves as religious, the study says.

Interestingly, the Battery Ventures study reveals that no matter what mobile operating customers choose, they’re just as likely to own a gun. Also, iPhone and Android users are equally likely to own a home.

Battery Ventures’ Jonathan Sills, who conducted the study, further told the publication that many differences go away when the user base is adjusted for income. Even so, such demographics differences may be useful to airlines or car companies looking to advertise their respective businesses on mobile devices.