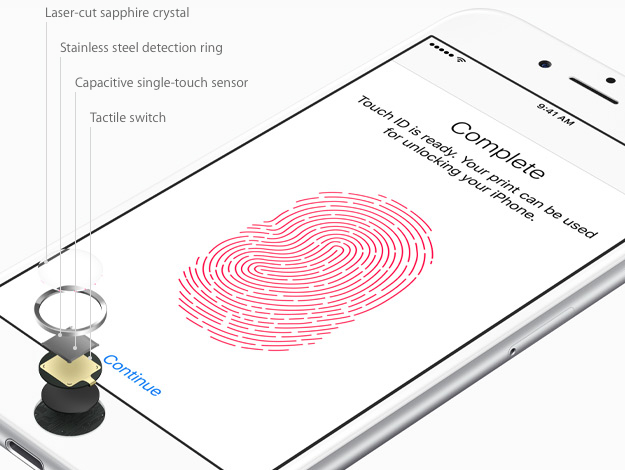 The Touch ID fingerprint sensor, launched as a signature feature of the iPhone 5s two years ago, is now embedded in all new iOS devices, allowing users to unlock iPhones and iPads, pay for goods in stores and online, and sign into apps and services thanks to third-party integration. Apple is always looking to improve the biometric sensor, and it just cooked up new functionality for Touch ID meant to enhance security for users and protect their personal data.

The iPhone maker is studying technology that would enable a “panic mode” on the iPhone that could be activated with a simple scan of a finger.

Titled Fingerprint activation of a panic mode of operation for a mobile device, a new Apple patent application explains how the user would be able to secure personal data on a phone by simply unlocking the handset with a specific finger, different from the fingers he or she would usually employ to unlock the handset.

The feature might come in handy if a thief threatens the safety of an iPhone owner, demanding that he or she unlocks the device. By using the panic mode finger, the user would unlock the iPhone, but the attacker wouldn’t be able to access any of the personal data that’s stored on it.

The panic mode could also be used to capture information about the thief trying to steal the iPhone, including photographs or video, which would be then sent securely to the user’s iCloud account. From there, the pictures and videos could be handed over to the police.

Panic mode might also enable the iPhone’s microphone so that the user could covertly record details about the attacker endangering his or her life. A loud alarm that can only be stopped when the user confirms they’re safe might also be triggered, or a distress signal that’s sent to nearby iPhones.

There’s also the option of triggering a specific app when enabling panic mode, like launching the phone app after the phone is unlocked so that the user can place a call.

This isn’t the first patent that explains how Apple could further improve the safety of the iPhone user. A similar patent describes technology that would be able to determine whether a user is in distress, and then launch certain emergency features. A different patent explains how the iOS might lock you out of the iPhone after detecting you’re behind the wheel.