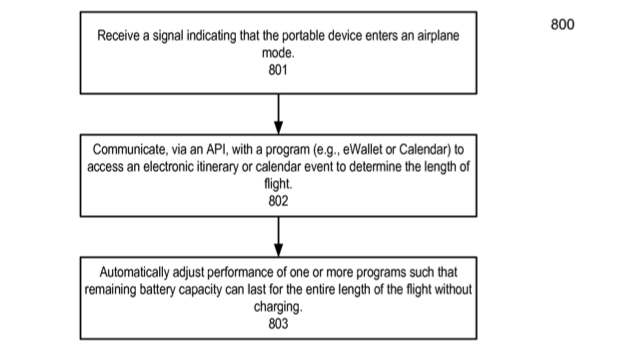 Apple may be working on a smarter way to fix battery issues affecting its mobile devices once and for all, a patent application discovered by AppleInsider reveals. The iPhone’s operating system would be able to analyze its user’s daily activities, patterns, and battery charging habits and figure out ways to prolong battery life by continuously optimizing power requirements based on the user’s needs.

The patent application – titled “Inferring user intent from battery usage level and charging trends” – describes an advanced technology that would be able to read inputs from various sources to determine the user’s iPhone-related requirements, and save battery life. The technology would constantly monitor battery consumption – long-term power budgeting – and try to determine the user’s needs instead of trying to save battery life only when the battery is already very low as “conventional systems” do, which may amount to “too little too late.”

The system would draw information from the way apps are used, the sensors of the phone, the location and the wireless connection in order to determine the best ways of conserving battery life, and to deliver the best performance while maintaining energy efficiency. The system would also try to actively adapt to the user’s actions in order to offer the same battery life between cycles the user expects, even in situations where the iPhone is used in an unusual way compared to the average.

“A power management action may be performed to accommodate such an unusual situation. For example, if the battery usage level is too high compared to the daily average battery usage, power consumption of certain hardware or software may be reduced to conserve power capacity, such that the remaining power capacity can last for the estimated period of time without charging,” Apple writes.

At the same time, the system would be smart enough to determine whether power saving modes are actually required for some users. Those hardcore iPhone owners that use the device extensively will not experience a poorer performance, as iOS tries to prolong battery life. “If the charge consumed exceeds the batteries capacity significantly then the user is certainly using its device fully and the power management system’s effect on performance to avoid the mid-day charge would likely be upsetting to the user, “ Apple says.

The system works automatically, without “user intervention or user knowledge,” which is interesting, but also worrisome, as the system would be able to access certain apps such as the Calendar or Passbook without the user knowing.

The means of prolonging battery life described in this patent application do not target only iPhone users as they could be applied for iPad, Macs and other Apple devices as well, although it’s not clear whether it’ll be soon used in future iOS or OS X versions.

A recently discovered patent showed one other area Apple is working on to offer a better overall experience to users, and that’s an automatic system of improving a device’s performance as it ages by monitoring the way it’s used.