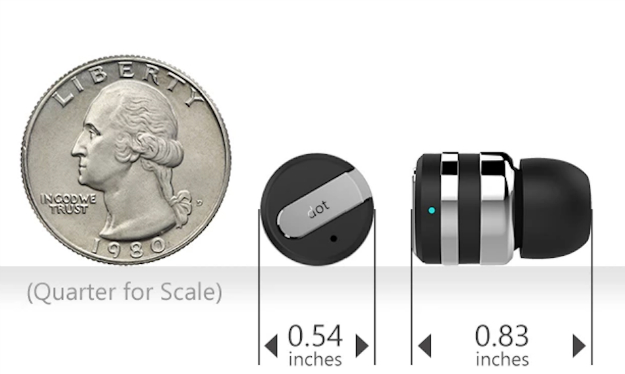 Motorola’s Moto Hint is definitely one of the most interesting Bluetooth headsets around, or at least that used to be the case until Dot arrived. The device is an even smaller headset compatible with the iPhone and Android handsets – Dot is dubbed the world’s smallest Bluetooth headset on Kickstarter, where it has almost reached $300,000 in pledges soon after launch.

UPDATE: Readers have signaled over the weekend that Kickstarter has temporarily stopped the Dot campaign due to certain issues, although it’s not clear at this time what happened.

Weighing only 3.5g, Dot offers you 6 hours of music playback or 9 hours of talk time. Furthermore, the battery gets you up to 80 hours of standby time, and Dot supports wireless charging.

The mono version of Dot costs $59 on Kickstarter ($40 off its future retail price) and the stereo version sells for $79 ($70 off its retail price). The Dot Bluetooth headset will ship anywhere in the world at some point in December.

Check out the video below for more details about the world’s smallest Bluetooth headset.