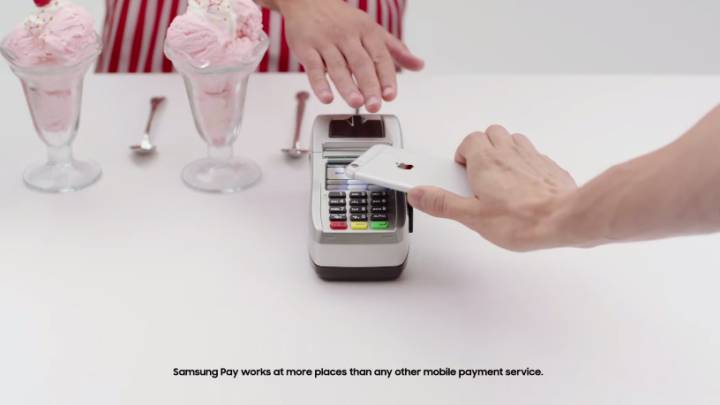 Samsung released a new series of ads in time for the iPhone 6s launch using a familiar tag line that riffs off Apple’s most recent TV commercials. Samsung’s It’s not a phone, it’s a Galaxy ads are a direct response to Apple’s If it’s not an iPhone, it’s not an iPhone advertising campaign, featuring ads that take direct and not-so-direct shots at the iPhone.

After launching a couple of ads that focused on wireless charging and phone customization, Samsung is back with new commercials that show two more unique features from its top-of-the-line Galaxy handsets – well, at least one of them is pretty unique to Samsung’s lineup.

Samsung Pay is the feature demoed in the first new ad Samsung posted on YouTube, showing a feature that’s already available on the iPhone: mobile payments. The ad clearly mocks Apple’s inability to offer Apple Pay at all retail stores, which Samsung sees as an advantage its Galaxy Note 5 and S6 models have over iPhones.

No matter how clever this ad might appear to be, there is some irony here. It took Samsung some five months to bring Samsung Pay to the U.S. despite launching it all the way back in March as a response to Apple Pay. Furthermore, the argument that Samsung Pay will be available in more locations than Apple Pay, without needing special hardware from the retailer (in this case, NFC-ready POS systems) will likely be futile in the near future. Shops all over the U.S. that accept credit card payments will have to update their hardware to support chip-and-PIN technology, and these machines will support NFC as well. At that time, Apple Pay, which only works with NFC, will also be supported.

Not to mention that Samsung will have Apple to thank if Samsung Pay takes off. After all, wireless payments existed long before Apple Pay, even on Samsung devices, but the feature never really struck a chord with users. Even the name of Samsung’s payment solution is an adaptation of Apple’s choice for its mobile payments service.

The second new ad highlights a unique feature of the Galaxy S6 Edge family, the curved display, which is ready to offer an immersive video experience to users. However, the curved screen, as exciting as it may be, has yet to provide Samsung an actual edge over phones that have regular flat screens, like the iPhone.