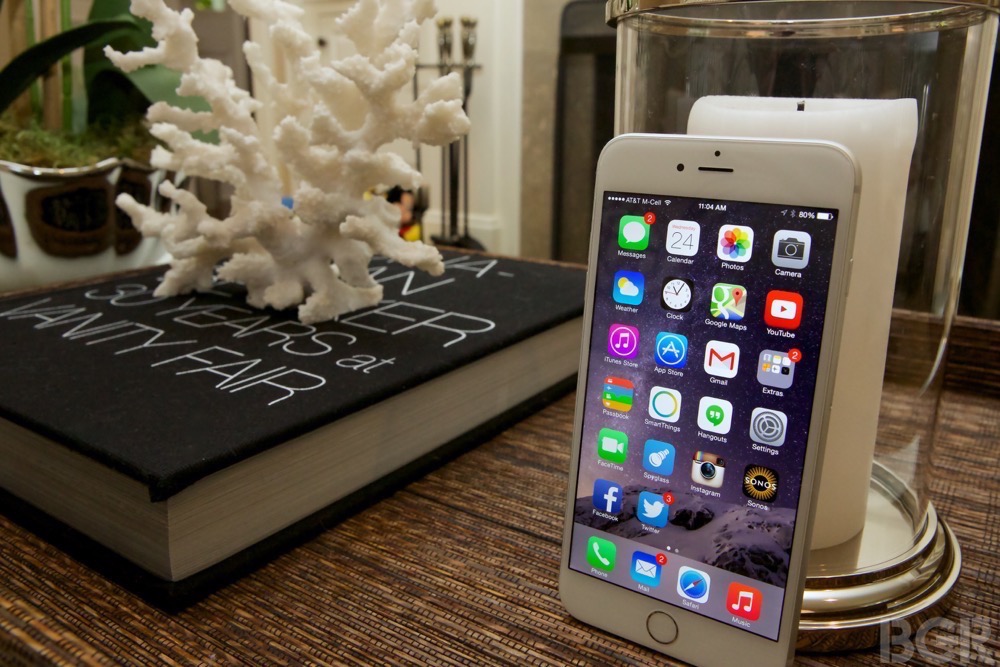 My thoughts on large phones have been known since the beginning, and that’s why I wanted to review the iPhone 6 Plus instead of the iPhone 6. If there’s a device that could get me to reconsider how I view 5-inch plus-sized devices, it would be the iPhone 6 Plus. It’s the same phone as the iPhone 6, just a little bit larger. I spent almost a week with one and here is what I think.

I’m not adverse to larger phones in general, and in fact, while I have used an iPhone 5s for the last year, I always use a second Android device. That has shifted between a Samsung Galaxy S5, HTC One (M8), and a Nexus 5 with Android L. I love the Nexus 5 with Android L, and the 5-inch screen is great. It was one of the devices that not only made my iPhone feel small, but helped me realize how useful a slightly larger screen can be.

Now, stepping up a little higher on the ladder, we have not just big phones, but a different category of mobile devices. One that sits in between smartphones and tablets. It’s a category that is decently popular across the global, in some markets more than others. But can an iOS device that’s larger, one that bridges the gap between these two categories actually add value?

Picking up the iPhone 6 Plus for the first time, my first thought was, this is just too big. It’s heavy, it doesn’t quite feel perfect when you hold it, and it’s near-impossible to use in one hand. The thing is, after I forced myself to use it almost full time for a couple days, I started to understand more of why this category can make sense for some people. If you rewire your brain to understand that this isn’t a normal smartphone, and one that really does require you to interact a bit more with it, it can work.

Apple introduced both the iPhone 6 and iPhone 6 Plus as practically identical devices, letting consumers choose their preferred screen size. Just like how there is an 11-inch and 13-inch MacBook Air, 13 and 15-inch MacBook Pro, and 7.9 and 9.7-inch iPad, you can now pick between a 4.7-inch and 5.5-inch iPhone. While there is a difference in the screen resolution, the main difference beyond the physical size is that the iPhone 6 Plus offers a much longer-lasting battery since it is physically bigger.

When you hold the iPhone 6 Plus, it doesn’t feel heavy per se, but it’s definitely a heftier device thanks to the glass screen, aluminum case and large battery. The tapered edges around the device make holding the phone a little unwieldy with one hand, and it is incredibly slippery. I have not ever used a case with any Apple phone, and while I bought a leather case for the Plus, it hasn’t been used. If this were to be my main phone, I would really consider using one though.

The hardware is beautiful — the most beautiful phone in this category in the world, without question. The screen is also the best display on the planet, pound for pound. There are other screens with higher resolutions — which, as an aside, are complete nonsense because you can’t tell the difference between 450ppi and 550ppi — and the colors, brightness, blacks, backlight, are all best in class here.

One thing I noticed on both iPhones is that the oleophobic coating on the screen seems to be different. It’s not as good as before, with the device holding fingerprints and dirt a little bit easier. It’s probably due to the new glass Apple is using, but thought it was worth noting. The vibrate mechanism has also finally been changed, and not only is it more powerful and louder, but it works better with shorter vibrate patterns, like when you’re in an iMessage and receive a new one — you feel the short quick vibrate instead of a regular one, and same thing when you’re on the phone.

I have had so much fun playing with the camera on here, from taking gorgeous low light photographs, to timelapse videos, and more amazingly, 240fps slow motion video. Apple has the best camera on a smartphone in the entire world, and there is no question about that. On the Plus, you actually get one level better because the phone has optical image stabilization. What this means is, when you’re taking a photo, the device will calculate the shakiness in your hand and move the camera lens in the opposite direction to counter that, offering up even better low-light performance.

The battery here is just amazing. It has lasted more than two days of use, with everything from phone calls to emails, to app usage, camera, video, AirPlay, music, and more. If you routinely put a Mophie on your phone, the Plus might be worth the slightly larger footprint for the battery alone. One other thing is that both new iPhones can charge much quicker than the older ones if you use a higher capacity charger like the iPad charger instead of the one that comes with it. It also charges much faster if you connect it to any recent Mac.

While I think using the iPhone 6 Plus as a phone — like, actually holding it up to your ear — looks borderline ridiculous, the phone calls I made sounded great. It seems like Apple has made some really great improvements to the ear speaker and phone in general. The speakerphone on the Plus also sounds fantastic. It’s much louder than previous iPhones, does lack a little low-end, but it’s really great.

Let’s talk about software because this is something that I really love about the iPhone 6 Plus — the split-screen views. When you’re in landscape mode in Apple’s apps, your phone functions as a mini iPad, letting you view the left column in addition to your content on the right. This makes you so much more productive and I wish it was available on the regular iPhone 6.

The problem with the iPhone 6 Plus is that, while the landscape views are nice, and the bigger screen is great, there are still too many compromises for me. I don’t want a device this big, one that barely fits in my pocket, one which is much heavier than a regular iPhone 6.

If I did not use an iPad, or computer, would I consider this as my only device? Sure. It would make much more sense, but I fail to see why the majority of people need or want a device this big. It’s certainly the best in class, better in almost every way than any other north-of-5-inch phone, but it’s just not for me. I still also think that a decent amount of people who bought the Plus are going to return it because of the phone’s size, weight, and heft.

The iPhone 6 is Apple’s new iPhone, and the iPhone 6 Plus is a new type of device, one in which Apple will continue to flesh out in upcoming releases, and maybe when it’s thinner and lighter, and the bezels aren’t so large, I would consider it again. But for now, you’ll find the best smartphone in the world in my pocket, and that’s an iPhone 6.