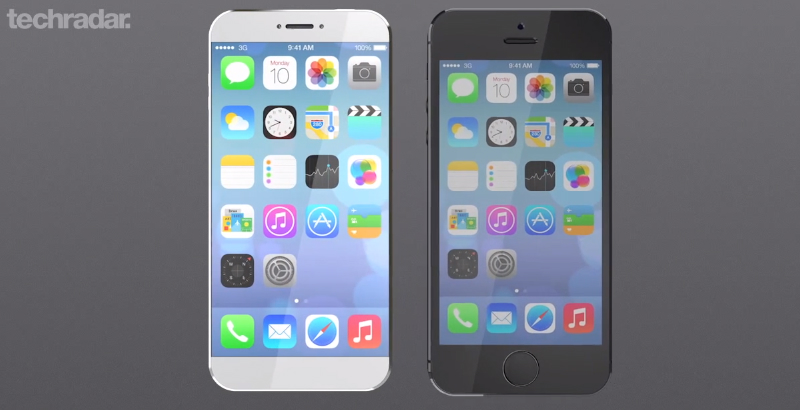 One way of increasing the screen size of the iPhone without significantly increasing the overall size of the handset may be for Apple to use an edge-to-edge bezel-free display and eliminate the physical home button, a new iPhone 6 concept from TechRadar suggests. The publication has imagined a next-gen iPhone 6 model that’s about the same size as the iPhone 5s, although it packs a 4.7-inch Retina display with Full HD resolution instead of a 4-inch Retina display.

While the physical home button is removed, the Touch ID sensor is still embedded under the glass, ready to offer similar functionality. Other imagined features for this iPhone 6 concept include self-healing sapphire glass covering for the display and a liquidmetal body. The device would also be the slimmest iPhone yet, measuring just 5.5mm. Finally, this iPhone 6 concept would have a 13-megapixel iSight camera with ring flash.

This is just one of many iPhone 6 concepts that hit the web recently, with many fans trying to guess what Apple’s upcoming smartphones will have to offer.

Various rumors and reports reveal that the company may be launching at least one new iPhone model this year, with a screen bigger than 4-inch. The device is also said to be thinner than predecessors and to pack a better camera, even though that doesn’t necessarily mean it’ll have more megapixels. Furthermore, many reports claim that the handset will have a sapphire display. Apple is also rumored to launch the new iPhone in summer this year rather than fall, with Foxconn and Pegatron already tipped to have received iPhone 6 orders.