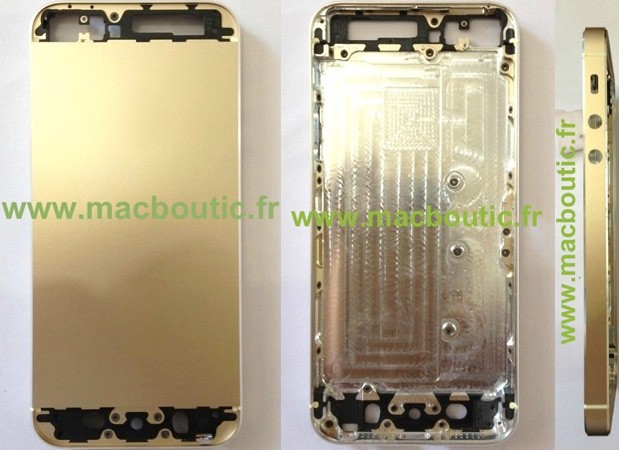 Rumors have been swirling over the past few days that Apple plans to introduce a third color option with the launch of the iPhone 5S. Now, images of what are claimed to be the casing from Apple’s next-generation smartphone in gold have been published by French blog MacBoutic. While the authenticity of the device pictured is unknown, the casing and internal markings do jibe with earlier leaks that are believed to be authentic. Also of note, the shade of gold appears to match images of a gold iPhone 5S SIM card tray published exclusively by BGR this past May.

Apple is expected to unveil the iPhone 5S during a press conference on September 10th, and the device is said to feature a faster processor, an upgraded camera with a dual-LED flash and an embedded fingerprint scanner.

The 5S will also reportedly be accompanied by the mid-range iPhone 5C, which is expected to feature more modest specs and at least five different color options.

Several leaked images of the supposed gold iPhone 5S casing can be seen above and additional images follow below.