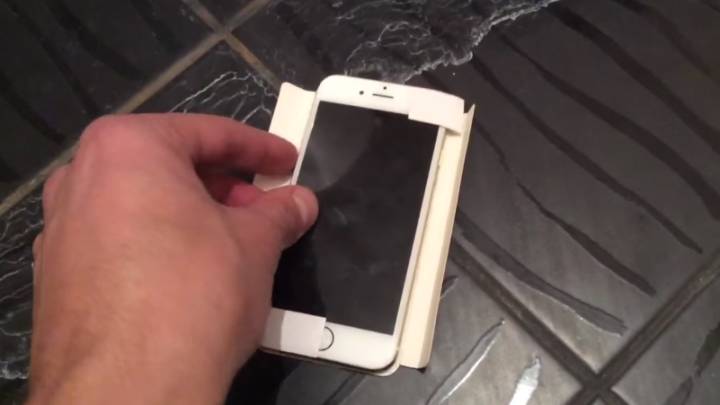 In case you haven’t heard, Apple is rumored to be planning some big changes to its iPhone release cycle this year. Rather than launching all new models at the same time, Apple will reportedly have a new 4-inch iPhone 6c – or iPhone 5e, or iPhone 7c – in stores at some point in the first half of the year, and then the iPhone 7 and iPhone 7 Plus are set to debut in September, as expected.

Now, it looks like the smaller model may have just been pictured for the first time.

Rumors so far have suggested that the new 4-inch iPhone is meant to replace the iPhone 5s as the cheapest iPhone in Apple’s lineup. The device is expected to cater to iPhone buyers who don’t want a bigger smartphone but still want all of Apple’s latest features including Apple Pay, 3D Touch and Apple Watch compatibility.

According to various reports, the iPhone 6c’s hardware is supposed to be similar to the components found in the iPhone 6. The new 4-inch handset should also resemble the iPhone 6 and iPhone 6s when it comes to design.

While many reports focused on the specs of the 4-inch iPhones, there haven’t been any meaningful leaks showing the design of the iPhone 6c so far. However, a 40-second video has now popped up on YouTube, featuring what appears to be the 4-inch iPhone 6c.

As you’ll see in the clip below, the handset isn’t turned on but it has all the design elements of the iPhone 6 and iPhone 6s, including rounded glass edges, a Touch ID home button, lateral standby button placement, rear antenna lines and iPhone 6-like color combinations.

In a nutshell, this is exactly what we’d expect a 4-inch iPhone to look like. The only thing missing, obviously, is an official Apple confirmation.