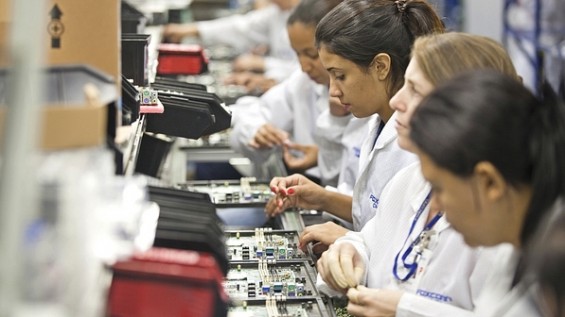 In an unfortunate case of déjà vu, an iPhone production facility in China has been caught committing multiple legal and ethical violations ahead of the upcoming iPhone 5S and iPhone 5C launch. Jabil Circuit is the U.S.-owned manufacturer that is said to be producing some iPhone 5C inventory in a factory located in Wuxi, China, and China Labor Watch has uncovered dozens of infringements during its investigation of the facility.

“Among the infringements uncovered by CLW include millions of dollars in unpaid overtime wages; over 100 hours of monthly mandatory overtime, three times in excess of legal limits; more than 11 hours of standing work every day with no rest outside of 30-minute meal breaks; illegally inadequate pre-work training; hiring discrimination; and more,” the group said in its report.

Apple has continually assured the public that it will keep a closer watch on its production facilities after the inhumane treatment of employees by Foxconn became too much for the company to ignore. The laundry list of violations uncovered by the China Labor Watch contradict both Apple’s promise and Jabil Circuit’s code of conduct. CLW also points out that these discoveries are evidence that labor violations extend beyond Asian-owned factories, an especially worrisome revelation.