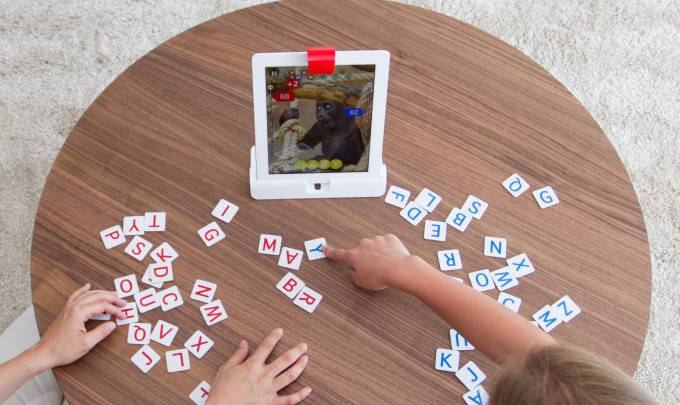 Founded by two ex-Googlers, Tangible Play is a company that has figured out a clever way to force children not to play on the iPad excessively. What the company has developed is an accessory and applications set that encourages kids to play using physical objects according to a set of instructions on the screen, thus preventing them from playing regular iOS games.

“[My daughter] could literally spend hours just looking at a screen, and doing nothing else. And as a parent, this is obviously concerning,” Tangible Play co-founder Pramod Sharma told TechCrunch.

The games developed by the company include a puzzle game, a word game and a physics game, which can be played with an iPad docked in a special stand that has the Osmo reflective camera accessory mounted on top of the camera. Thanks to a technology described as “Reflective Artificial Intelligence,” which sees objects, shapes and letters placed in front of the iPad on a flat surface, the iPad app that corresponds to the chosen physical game can recognize what the kids are doing and provide instructions.

The company has tested its games in more than 100 schools, and “came to better understand the potential for Osmo from an educator’s perspective, explaining that their group play nature could help with a child’s social and emotional learning, while other games taught different concepts, like spatial intelligence and creative thinking.”

Tangible Play aims to raise $50,000 in a crowdfunding campaign that kicks off today, with Osmo kits selling at $49 on its website, which is only half of what the set of games will cost when the product becomes widely available.

The video below explains how the Osmo games are played.