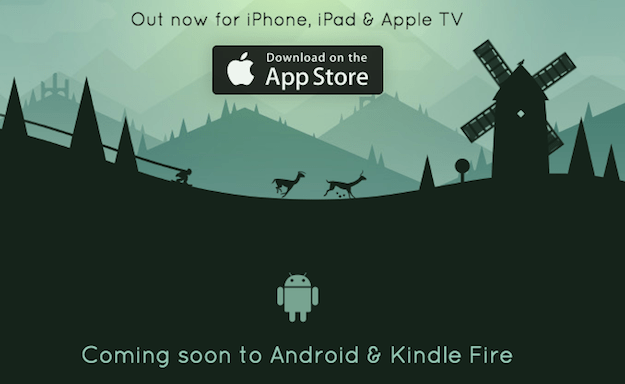 No matter what you think about the Android/iOS divide from either a hardware or software perspective, there’s simply no getting around the fact that many developers still take an iOS-first approach with respect to app development. With games, where development costs are already sky-high, the dynamic is even more pronounced.

For instance, one of the most addicting, successful, and highly rated apps currently available on the  App Store is a great snowboarding game called Alto’s Adventure. Originally released this past February for the iPhone and iPad (and now the ), the game is not only incredibly fun to play, it also houses some of the most eye-catching, beautiful, and immersive graphics to ever hit a mobile device. WIRED hit the nail on the head when it called the game “a piece of interactive art.”

Alto’s Adventure has deservedly received rave reviews from every game and tech publication imaginable; and yet, it remains an iOS-only affair. Still today, nine months after its initial release, an Android version of the app remains non-existent. Back in September, Noodlecake Studios announced that they were working to port the game over to Android and the Kindle Fire, but a release date hasn’t yet been revealed.

Now if you’re an Android user who happens to enjoy mobile gaming, it’s easy to see how this dynamic playing out over and over again can quickly become an endless source of frustration.

With that in mind, Ben Kuchera has an interesting article up on Polygon where he explains how the lack of first-release games for Android recently caused him to make the switch over to the iPhone.

What makes Kuchera’s take so intriguing is that he actually enjoys, and seemingly prefers, the Android user experience relative to the iPhone. In addition to the flexibility Android provides, Kuchera finds that it’s a “much more personable, able mobile operating system” than iOS.

But Android is a terrible platform for gaming if you’re interested in new releases, and I’m done with it. I’m not the only person who thinks of their phone as a mobile gaming system more than a communication device, and for those people Android is a bum deal.

It extends to toys as well. The Android version of the app for Disney’s Playmation toys, I was told, is “coming soon,” but it was ready at launch for iOS. I couldn’t test that aspect of the product because it wasn’t available to me. Because I was on Android.

Almost all of the most interesting games by the developers and designers I care about and follow are released to iOS first, with the Android version coming a few weeks later, if we’re lucky. Sometimes it takes months, if it happens at all.

As to why Android games are often delayed, Kuchera caught up with an iOS developer who explained that developing for Android is a more time-intensive process because developers have to account for a wide array of varying devices, each with their own unique lineup of processors, screen resolutions and more. In short, the same fragmentation that provides users with so much choice also presents a huge headache for developers.

“With iOS you only have to test maybe eight to 10 devices,” developer Barry Meade explained to Polygon, “and that’s only because we choose to support pretty old devices, many don’t. With Android you’re looking at hundreds of devices off the bat, each with different hardware/screen set-ups.”

Another related factor to consider is that developing for Android is typically a more expensive endeavor, sometimes to the tune of 30% more in development costs. Furthermore, support costs are often more expensive for Android titles because, again, there are far more devices to account for.

Another point worth mentioning is that iOS users, on average, spend more money on apps than their Android counterparts. That being the case, even if iOS and Android development costs were practically equal, it makes sense that developers would choose to target the platform where they’re far more likely to see a quicker return on investment.

Now all this isn’t to say that the iPhone reigns supreme over Android. After all, if you’re not terribly interested in mobile gaming, you probably couldn’t care less about which platform gets which games before the other.

But if you do happen to be interested in mobile gaming, even just as a casual fan, Kuchera’s full and even-handed assessment of the iOS/Android battle is well worth checking out in its entirety.