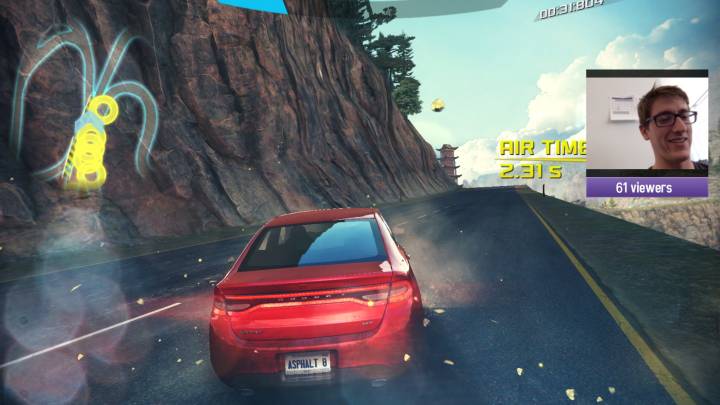 Twitch has been making headlines recently as Microsoft and Sony duke it out for a more robust game streaming experience, but the most exciting news from the increasingly popular platform has nothing to do with home consoles. Earlier this month, Twitch announced that it would be bringing live game broadcasts to mobile devices, and now the company is ready to reveal its first mobile partnership.

Asphalt 8, the latest entry in Gameloft’s long-running racing series, will be the first iOS game to feature Twitch functionality, making use of the front-facing camera and the microphone to allow players to broadcast their game sessions and themselves while racing through the game’s tracks.

Similar to the PC and Xbox One versions of Twitch, mobile gamers will be able to archive their sessions for future viewing and monitor chat in real time. According to Twitch, the streaming features are currently optimized for iPhone 5s, iPad Air and the retina iPad Mini. If you want to check out what mobile broadcasts will look like, head on over to Gameloft’s Twitch page starting later this week for a 24-hour live stream event showcasing the new functionality. You’ll be able to try it out for yourself soon. The full press release can be found below.

Twitch Partners with Gameloft for First Ever Mobile Streaming Experience

SAN FRANCISCO – March 17, 2014 – Twitch, the world’s leading video platform and community for gamers, today announced that Gameloft’s Asphalt 8: Airborne for iOS will be the first ever mobile game to feature Twitch’s live streaming functionality. Gameloft will demonstrate the game’s broadcasting capabilities during the week of the Game Developers Conference with a 24-hour live stream event on Twitch.

Published by Gameloft, Asphalt 8: Airborne is an award-winning mobile arcade racing game where players race against the A.I. or real world players, while performing dynamic, high-speed aerial stunts. With more than 43 million installs and a hard-to-achieve 91 Metacritic score, including perfect ratings from several top media outlets, it is the ideal game for introducing live streaming to the mobile games market.

“This first-ever mobile game integration with Twitch opens the door for gamers to broadcast and share game play experiences like never before,” said Baudouin Corman, VP of Publishing for the Americas, Gameloft. “As one of our most popular games, Asphalt 8: Airborne made perfect sense to integrate the Twitch mobile SDK, and we can’t wait to see the excitement it brings to our users.”

Beyond broadcasting gameplay to the player’s Twitch channel, Asphalt 8: Airborne’s Twitch integration unlocks the door to a host of interactive functions. These include the ability to stream your voice and image using your iOS device’s microphone and front-facing camera, and to monitor chat from people viewing your stream. Players can also archive their streams and share them over social media or discover streams from other Asphalt 8 players from within the app.

“Live broadcasting represents one of the most important shifts in the way people play games,” said Matthew DiPietro, VP of Marketing, Twitch. “Twitch has quickly found a home on consoles, so by partnering with Gameloft to launch the first streaming-enabled mobile game brings us one step closer to being everywhere that gamers are. Also, by being integrated into Asphalt 8: Airborne, one of the highest rated mobile games, should ensure it resonates with our community.”

To showcase this mobile gaming innovation, Gameloft will be hosting a 24-hour live stream event during the week of March 17, 2014 on their Twitch channel:http://www.twitch.tv/gameloft. The broadcast will feature a walk-through of all the streaming options, interviews with the development team, giveaways every three hours, and a Q&A session with Twitch viewers. Stay tuned for more details on the exact time and date.

Twitch functionality is currently optimized for iPhone 5S, iPad Air and iPad Mini with Retina Display, and will be live as part of Update #3. This update includes brand new events and cars, as well as a new area and user interface, all of which will be available soon on the App Store.