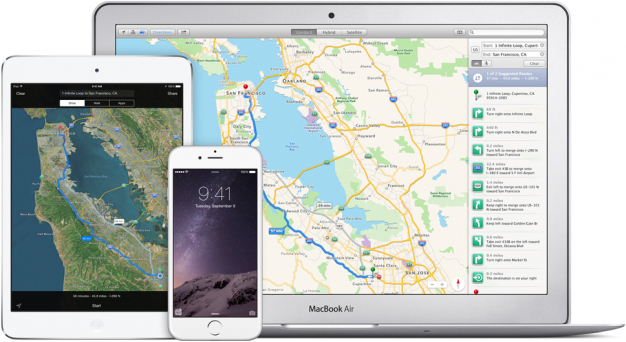 Apple is continuously working to improve its Maps application and transform it into a better Google Maps alternative, and two newly discovered patents reveal the iPhone maker may have big mapping plans for the future of iOS devices. These plans might also help explain why Apple made the handy but previously optional Find My Friends app a default system application in iOS 9.

Discovered by Apple Insider, the two patent applications were published Thursday after being filed in December 2013. Both applications detail means of sharing location information between iOS devices, including pinpointing a user’s exact location even when he or she is inside s building.

The first patent, called Customization Location Notification, describes a technology that would further expand the capabilities of the existing Find My Friends application, adding automatic notifications based on a user’s precise location.

Specifically, users will be able to choose when to share location information with friends and family, and the updated app would send a detailed notification via text or email to the target when the location conditions are met, telling him or her where the user is located in relation to a landmark, and how long it’ll take to get there.

The recipient of the notification would also get mapping information showing the best path to take to meet the contact who initiated the location data exchange (as seen in the image below).

The feature would make use of geofencing technology, meaning that the iPhone could interpret a user’s location at all times, and trigger the notifications according to preset rules.

While it’s easy to locate an iPhone user outdoors using GPS and other means to acquire a phone’s position, Apple is also looking at ways to map buildings and providing location services indoors.

The second patent, titled Indoor Remote Triggered Location Scanning, describes technology that would let Apple locate an iPhone user inside a building with the help of preset nodes that can detect the location of a device.

To locate an iPhone user indoors, the system would asses signal strength from three nearby permanent nodes and determine the approximate distance to each one, and thus establish the location of a device using triangulation.

The technology could be used by itself or in combination with other Apple inventions to improve indoor location services in the future. However, as is the case with other interesting patents awarded to Apple, it’s not clear when these technologies might actually be available on iOS devices, or whether Apple will even deploy them in the future at all.