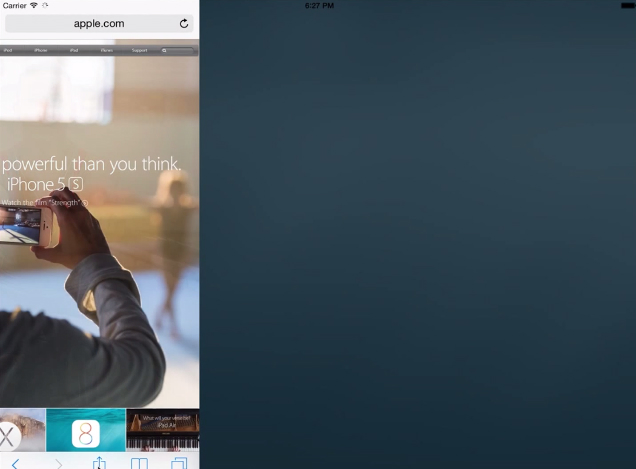 The software feature is run in a simulator on a Mac, which explains the “mouse cursor and painfully awkward two-finger swipe gestures,” and shows how the Safari browser app can be resized to take up 1/3, 1/2 or 3/4 of the screen.

However, the interesting part of this particular iOS feature is not yet revealed, and that is running a second app alongside with the resized one. Thus, the video doesn’t show how the user would switch between apps, and how Apple imagined moving back and forth between apps active on the screen.

Supposedly, Apple did not have time to finish the feature in time for WWDC, but split-screen multitasking may come to iOS 8 devices later down the road.

The feature is expected to be available to iPad Air initially, with support for iPad mini and the bigger iPhone 6 models expected to arrive in the future.

Split-screen multitasking is all the more interesting when taking in consideration existing iPad Pro rumors, as a bigger 12.9-inch iOS tablet could benefit the most from such iOS 8 functionality.

The video showing the hidden iOS 8 feature follows below.