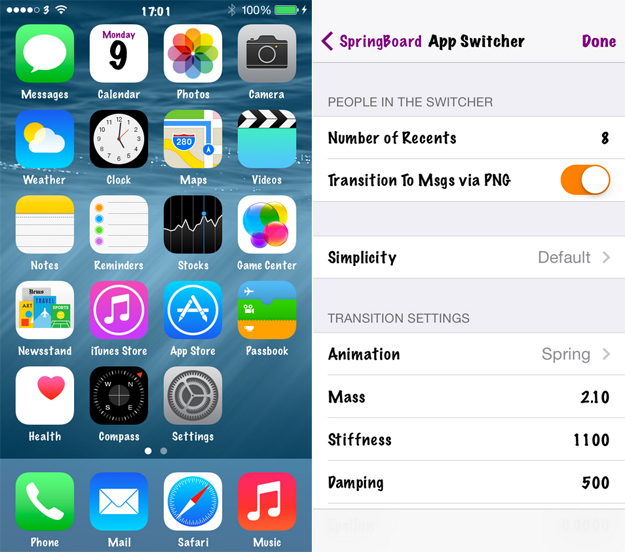 Apple’s iOS platform and Google’s Android software are quite similar in some ways, but there are a number of areas where these two leading mobile platforms differ dramatically. One such area pertains to user interface customization — Android’s open nature has allowed for the creation of a wide range of third-party user interface tweaks that help people customize Android to better suit their needs. Apple might never open iOS up quite that much, but secret options in iOS 8 have been uncovered that let users make some big interface customizations for the first time.

Outside of accessibility features such as the ability to increase iOS’s font size or improve contrast to make on-screen elements more visible, Apple does not allow iPhone and iPad users to alter the user interface in iOS. With iOS 8, however, that may change.

Developer Hamza Sood recently posted some screenshots from his Twitter account that show new interface customization options in a hidden menu in iOS 8. Using these options, iPhone and iPad users can tweak the UI to display different fonts and also to show different colors for text colors and highlights.

Sood has revealed a number of other hidden iOS 8 features in the past few days that have been verified.

There is obviously no way to tell at this point if these new customization options will make it through to the public release of iOS 8 this fall, but they could indicate that Apple is at least toying with the idea of giving users more freedom to customize their iOS experiences in order to make the software their own.

For more on Apple’s next-generation mobile platform, check out our iOS hub!