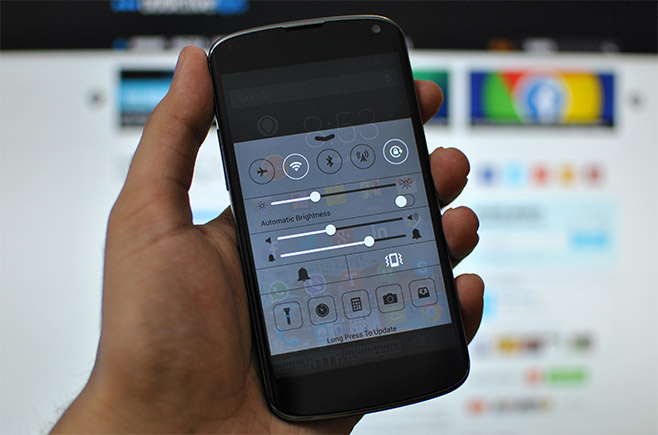 iOS 7 might not be packed full of innovation like some had hoped, but it definitely lays the groundwork for some big developments in the near future. Despite being defined by renovation rather than innovation, however, there are some great new features in Apple’s next-generation mobile software. Among them is the new iOS Control Center, which gives users quick access to several key settings and apps by simply swiping up from the bottom of any screen. iPhone, iPad and iPod touch users won’t have access to this great new feature until iOS 7 launches to the public this fall, but thanks to one developer, Android users can have iOS 7’s new Control Center feature right now.

Hi Tools Studio recently released a free Android app appropriately titled “Control Center.” As its name might suggest, the app brings iOS 7’s Control Center to Android. Once installed, users can swipe up from the bottom of their displays on any screen to pull up the new Control Center feature, which looks just like the iOS Control Center and features quick access to settings like airplane mode, Wi-Fi, Bluetooth, display brightness, ringer volume and more. It also includes shortcuts to enable and disable flashlight mode, open the camera and more.

Getting the iOS 7 Control Center on your Android phone is much easier than applying other iOS 7 tweaks for Android, such as the iOS 7 theme we covered recently. The app is available for free in the Google Play app store, and a link directly to the app can be found below.

UPDATE: Control Center developer Hi Tools Studio has contacted BGR via email to state that its original Control Center app has been pulled from the Google Play store. A Hi Tools Studio spokesperson says Google pulled the app after receiving a complaint from Apple and he forwarded an email from Google, a portion of which follows below:

Location_of_copyrighted_work: The application “Control Center”, which is available at https://play.google.com/store/apps/details?id=com.easyandroid.hi.controls, copies, without authorization, the “Control Center” feature of Apple’s iOS 7. Apple owns the copyright in its iOS software and each of the features thereof. The aforementioned application infringes Apple Inc.’s (“Apple”) copyright rights in the iOS 7 software.

The developer has posted a new version of the Control Center app, which can be downloaded here, and he promised to continue to improve the app moving forward.