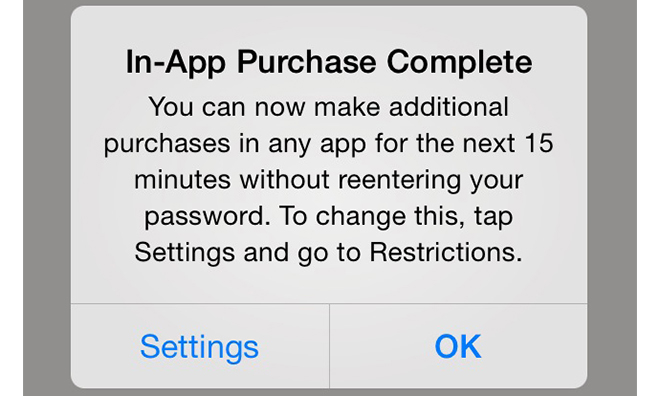 In addition to all the changes introduced with iOS 7.1, Apple has also added a new notification that warns users about how in-app purchases work by default, AppleInsider reports. The new warning message tells iOS users making in-app purchases for the first time that additional purchases are available in any app for a period of 15 minutes after the password has been entered. The warning message also offers a direct link to the Settings application, where the user can set the device to ask for the Apple ID password for each purchase, replacing the default 15-minute password-free purchase window.

The move likely follows Apple’s settlement with the FTC in an in-app purchase-related lawsuit, and aims to better inform iOS device users about the App Store’s purchase policies. Apple has agreed to refund more than $32 million to parents whose children were able to purchase in-app content without their parents’ consent or knowledge.

Furthermore, under the settlement’s terms Apple has to make changes to its App Store so users give their explicit consent when purchasing any kind of content, including in-app items.

Google has been recently hit with a similar lawsuit, with a woman saying her kid was able to purchase in-app content from the Google Play Store. Google has a 30-minute window after the password has been entered, during which in-app purchases are possible.

In addition to the FTC investigating Apple for in-app purchases, the European Union has also called meetings with Apple, Google and others to try to regulate this particular digital content sales practice available in many mobile apps.