14 Photos Of The Coolest International Borders In The World 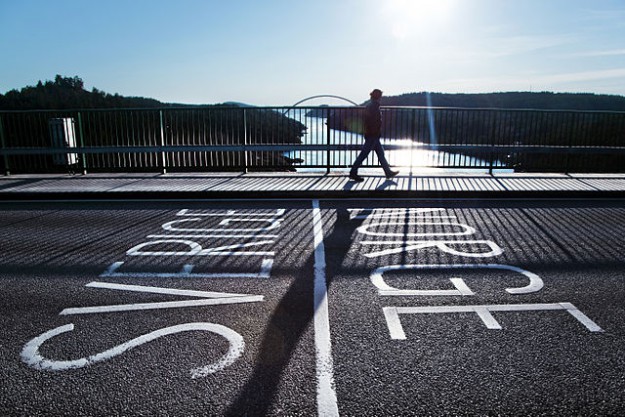 When we think of international borders between countries, we often tend to think of either secured checkpoints or, perhaps, unremarkable, isolated, and imaginary dividers between two pieces of land.

Some borders, though, are truly fascinating and downright cool. Listed below are some of the more interesting international borders on the planet.

Without question, this border between Norway and Sweden is one of the coolest in existence. Here we have Norway on the right and Sweden on the left. The border trail you see here, not all of which is rideable, is over 1,000 miles long.

What makes the photo above all the more intriguing is that riding snowmobiles in Norway, believe it or not, is actually illegal. Sweden, in contrast, permits it. As for the reason behind the snowmobile ban, authorities in Norway believe it frightens local wildlife and has an otherwise detrimental effect on the environment. Incidentally, Norway also banned skateboarding from 1978 through 1989, but that’s another story altogether.

Moving along, the trail above isn’t the only cool border crossing that separates these two countries.

To say that North and South Korea don’t get along would be a grand understatement. The photo below shows an interesting border area between the two countries located in the village of Panmujom. The important thing to note is that the border here isn’t the street, but rather the wooden plank that cuts through the center of the blue structures. As a point of interest, the two countries will some times hold talks inside of the blue buildings.

The photo below is also interesting and highlights the dire living conditions in North Korea. Contrast the bustling night-time lights in South Korea with a North Korea shrouded in darkness. NewScientist notes that “night-time luminosity is thought to correlate with economic prosperity, by which measure North Korea is practically penniless.”

Nothing simpler than a string to signify a border.

What we have here is a unique triple border between Argentina, Paraguay, and Brazil, separated by the Parana and Iguazu Rivers.

This border might give Norway and Sweden a run for their money. Snowmobiling across a border is one thing, but ziplining from Spain to Portugal just takes things to a whole new level. The zip line here is a little less than half a mile long and may very well be the most exciting way to travel, border crossing or not. As an added quirk, you actually gain an hour of time when you land in Portugal because it happens to be in a different time zone than Spain.

You can see a video of the zipline in action below.

A statue of Jesus, weighing in at 4 tons, separates the border here between Argentina and Chile. The statue, known as “Christ the Redeemer of the Andes” was put up in 1904 to signify peace between the two South American countries.

These two countries don’t always get along, but they do share a fascinating and remarkably unique ceremony at the Wagah border crossing. The ceremony below occurs every single day before the gate joining the two countries is locked for the night. On each side of the gate, citizens from India and Pakistan shout patriotic slogans as soldiers engage in an extravagant set of marching moves involving high kicks and other displays of visual flair. The 45-minute ceremony concludes with soldiers from each country shaking hands and the gate closing.

Video of the unique tradition can be seen below.

On the left is San Diego, and to the right is Tijuana, Mexico.

These giant fish across the Poland and Ukraine border are intended to represent unity. The unique design was created by Polish artist Jaroslaw Koziara as part of a Land Arts Festival. As a point of interest, NBC notes that “the giant fish was created by seeding different kinds of plants on the field between the Polish and Ukrainian border.”

This border, interestingly enough, runs through the town of Baarle, dividing the town into two separate municipalities, one on the Netherland side and the other on the Belgium side.

Germany and the Netherlands

How about a border that exists inside a building? The photo above comes courtesy of NPR which notes that “on one side of the building there’s a German mailbox and a German policeman. On the other side, a Dutch mailbox and a Dutch policeman.”

No list would be complete without a mention of the iconic Great Wall of China.

Chung Ying Street is a famous street which separates Hong Kong from Shenzhen. Once a popular shopping destination in the 1980s for visitors from mainland China (especially those looking for gold), the area today is much harder to visit as permits are now required.

Though not so much a border crossing, the Diomedes Islands are certainly worth a mention here. The island on the left belongs to Russia while the island on the right is part of Alaska and belongs to the United States. Notably, the international date line runs between the two islands which are located in the Bering Strait.