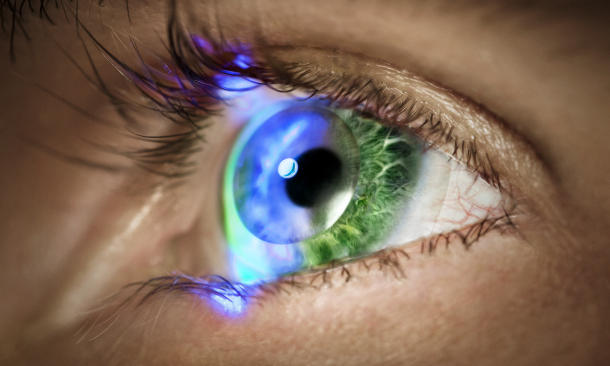 Forget Google Glass — connected eyewear is about to get a serious adrenaline shot next week when Bellevue, Washington-based Innovega shows off augmented reality contact lenses during this year’s International Consumer Electronics Show. Dubbed iOptik, the lenses represent a different approach to head-worn wearable devices, and they have the potential to offer a much more immersive and compelling user experience. But for those intrigued by the potential for a heads up display that isn’t quite as geeky as Google Glass, don’t get too excited just yet. The iOptik lenses are half of a two-part system and in order for them to do anything, they need to be paired with Innovega’s companion eyewear.

The lenses themselves will not be capable of displaying any content. Instead, they pick up light from images that are projected by the glasses that accompany them.

“Why does one need to slip something over our eyeballs to use the iOptik system? Because by utilizing the specialized lenses to help users focus on both close and faraway objects — an issue when putting panoramic images inches from the eyes — in conjunction with the glasses to project the media and overlays, Innovega is able to do two things when most wearables do just one,” CNET’s Nick Statt explained in a post on Friday.

CES 2014 will mark the first time Innovega shows off a fully functional prototype of its iOptik augmented reality solution, but the device’s launch is not imminent because the company’s lenses are not yet approved for sale. Innovega’s CEO Stephen Willey notes that they only need 501(k) market clearance rather than approval from the FDA. “It’s called a market clearance because contact lenses have already been approved many times over, with many different designs,” he told CNET.

A video that showcases the iOptik experience is embedded below.