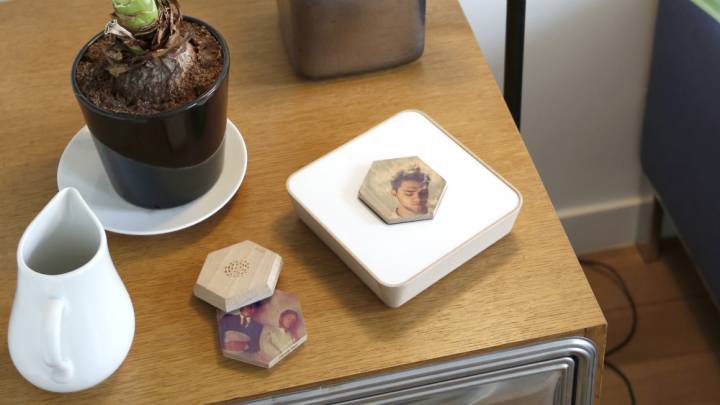 In a world that’s more and more focused on digital content rather than physical media, Qleek wants to make physical media popular and beautiful again by reinventing how digital content is stored and played. Qleek is composed of a wooden media player that can play whatever’s on a Tapp, which is a tiny wooden hexagon capable of carrying all sorts of data, including pictures, videos and music. A Tapp is also user-customizable, both in terms of its external appearance and the content it carries.

The Qleek will beam content from the Tapp it houses via Wi-Fi to a big screen TV or projector thanks to an HDMI-enabled Qleek Connector. It’s not clear, however, how much storage space will be available in each Tapp disc.

Qleek is currently seeking funding on Indiegogo, and needs to raise $70,000 to move forward with production – with 16 days left in its campaign, it has already moved passed $46,000 in pledges.

The cheapest Qleek and Tapps combos costs $199 ($50 less than the commercial version) and will ship in December assuming the funding goal has been reached. The pack includes one player and 5 Tapps, while each additional Tapp costs $6. Furthermore, a Hive, which can be placed in various locations around the home, costs $20, and can house up to 7 Tapps. The Hive is metallic, while Tapps are magnetic, which means the user can go wild creating custom Tapps shelves.

Videos explaining how the Qleek and Tapps combo works follow below.