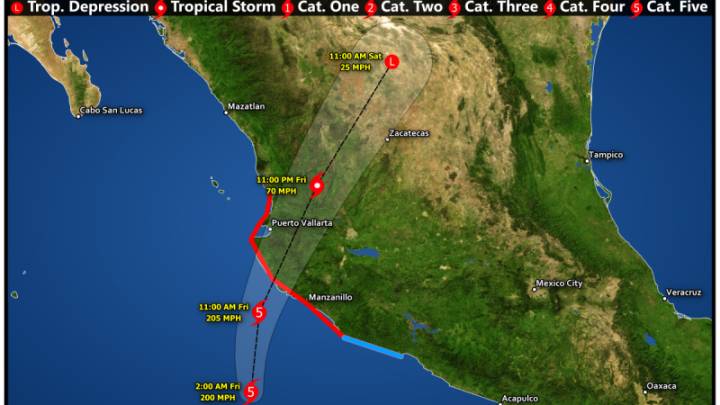 Mexico is about to be hit by a huge tropical cyclone that might turn out to be the most dangerous such meteorological event ever recorded. Hurricane Patricia set a new record for the strongest wind ever registered for a storm of this magnitude, with wind speeds reaching 200 mph. What’s more, the cyclone might grow even stronger before it starts to slow down.

An Air Force Hurricane Hunter aircraft flew directly into the hurricane last night to measure the wind speed, temperature and pressure, Gawker reports. “No weather models predicted this, and just a few short days ago, even the most experienced meteorologist would have laughed if you mentioned the possibility,” the news site wrote. “It is a feat of Mother Nature that a small swirl of clouds would soon become a storm that is now The Storm by which all others will be compared for decades to come.”

The onboard instruments registered wind speeds of 200 mph predicted to go even higher in the coming hours, and a minimum central pressure of 880 millibars. Temperature in Hurricane Patricia’s eye, meanwhile, read an astounding 89 degrees Fahrenheit thousands of feet above the surface of the ocean.

At flight level, the Hurricane Hunter plane recorded sustained winds of up to 221 mph.

The massive storm will hit the Pacific coast of Mexico in the coming hours and head further inland over the next few days, potentially bringing destruction of catastrophic proportions. If you’re anywhere in its path, especially in the coastal region, you’d better seek safety right away.