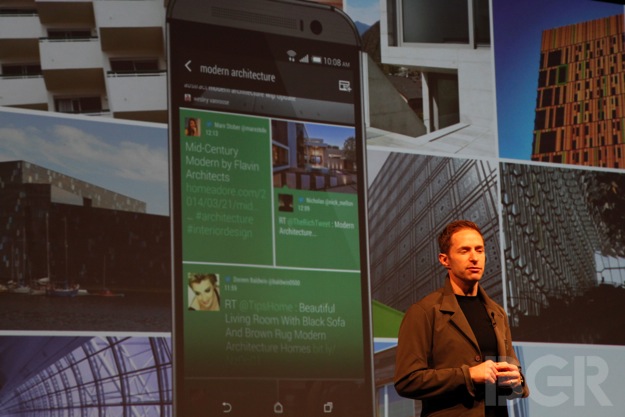 HTC’s custom news-reading BlinkFeed app has further been tweaked in Sense 6.0, and it’s apparently ready to offer users even more information than before, whether it’s custom news pulled from various sources including social networks, or app-related information. During the live HTC One (M8) show, HTC confirmed that it’s opening the BlinkFeed SDK to developers, with partners including Foursquare and Fitbit already integrating BlinkFeed support in their apps.

Interestingly, the new smartphone can act as a Fitbit activity tracker, which means users won’t actually have to buy an accessory to have Fitbit content displayed in their BlinkFeed.

On top of making BlinkFeed available to developers, HTC has also released a BlinkFeed app in the Google Play Store – spotted well ahead of the special event – that will allow the company to quickly update it without having to wait for carriers to push them out. Furthermore, HTC has confirmed that Sense 6.0 apps including BlinkFeed will be available on older HTC devices including last year’s HTC One (M7), HTC One Max and HTC One Mini. An update this spring will bring the new Sense 6.0 apps to older HTC hardware, the company says.

Also interesting is the fact that the BlinkFeed app may arrive on other Android devices.

“Following its popularity with HTC users, HTC will now make HTC BlinkFeed available to other Android devices launching on the Google Play Store soon,” reads a tiny footnote in the press release, hinting that the app may hit non HTC devices at some point later down the road.