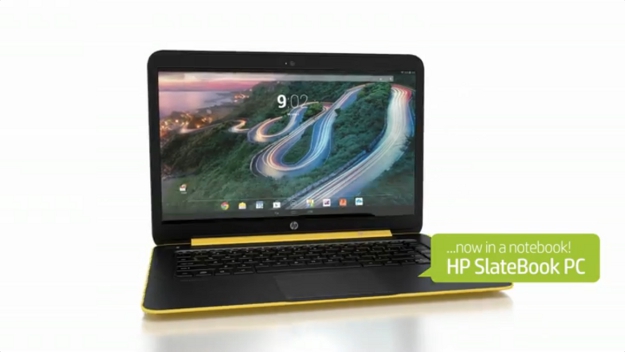 Up to now, Android has been reserved for smartphones, tablets and the occasional hybrid, but a leaked video reveals that HP might be bringing Google’s mobile operating system to the computer market. Notebook Italia was the first to come across a video on HP’s website showcasing the HP Slatebook 14, a low-end laptop that appears to be the rumored “Androidbook” which never came to fruition last year.

The specs for the notebook include a 1080p 14-inch touchscreen display, Nvidia Tegra quad-core processor, 2GB of RAM, 16GB of internal storage (expandable with an SD card slot), polycarbonate shell and Android 4.2 Jelly Bean. The notebook will also feature Wi-Fi 802.11 b/g/n and Bluetooth, Beats Audio, three USB ports, an HDMI port and a SIM card slot for use with HP DataPass.

In the demo video below, we see that the notebook is preloaded with Google Play, signaling that Google has signed off on this non-Chrome OS dedicated device. Introducing a new subset of Android devices, and a potential competitor to the already niche Chromebooks, is a bit confounding, but both HP and Google must have found an audience as the Slatebook 14 looks all but ready to ship.

Notebook Italia expects HP to introduce the device at Computex 2014 in Taipei next month.