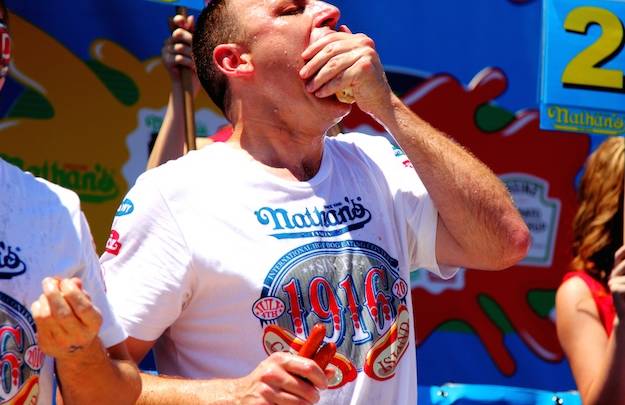 Later this afternoon, one of America’s most bizarre Fourth of July traditions will kick off. No, we’re not talking about fireworks, we’re talking about an old-fashioned hot dog eating contest. Set to take place at Nathan’s Famous in Coney Island, New York, the event will determine if 8-time winner Joey Chestnut can reclaim the hot dog eating crown from 2015 winner Matt Stonie.

Last year, Stonie topped Chestnut after downing 62 hot dogs in 10 minutes. It was an upset for the ages! While 62 dogs is an impressive figure to be sure, it’s still a ways off from the all-time record of 73.5 hot dogs that Chestnut scarfed down in 10 minutes just a few days ago. And remarkably, Chestnut indicated via Twitter afterwards that he still had room for more!

If you’re at all interested in watching this year’s hot dog eating competition and perhaps seeing if Chestnut can set a new record, here’s how you can watch the bizarre and uniquely American hot dog eating contest.

The men’s portion of the competition kicks off at 12 noon Eastern Time, and if you’re a cable subscriber you can catch all the action via a live stream on the WatchESPN app or via the WatchESPN website. Remember, you’ll have to enter in your cable credentials in order to enjoy the action.

If you’re not keen on checking out the event live, ESPN’s main broadcast channel will be airing the competition in its entirety at 3 PM Eastern Time.

As a point of interest, the winner of this year’s hot dog eating contest will take home $10,000 in prize money. That’s approximately $142 per dog (assuming a winning tally in the ~70 range).

And finally, for those looking to get amped up for this afternoon’s festivities, below is a video featuring last year’s contest.