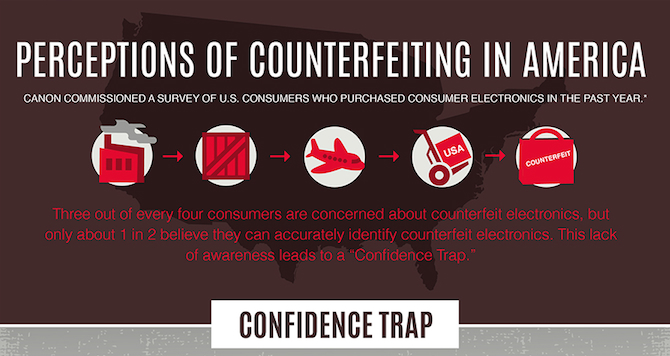 Many consumer electronics buyers in the U.S. end up purchasing counterfeit goods, a study commissioned by Canon reveals, with almost one in five buyers having paid for such devices in 2013 without knowing they were fakes. Furthermore, of those people who unknowingly purchased fake gadgets, more than half thought that they were actually able to spot counterfeit electronics.

“Most American consumers are unaware of the full risks associated with these potentially dangerous devices. Four in ten of the U.S. consumers surveyed don’t know counterfeit consumer electronics can harm them, and this lack of awareness leads to what Canon calls a ‘Confidence Trap’,” Canon USA Technical Advisor, Professional Engineering & Solutions Division Chuck Westfall said. “Based on the survey, consumers seem overconfident in their ability to spot a fake, and as a result, are at risk of possible harm.”

Canon also revealed that according to the Department of Homeland Security, $145 million worth of counterfeit consumer electronics entered the U.S. in 2013.

The study further revealed that people with ages between 18 and 35 were five times more likely to purchase fake electronics than older people, even though most of them consider themselves very knowledgeable in identifying such goods – the study says that one in four young people continues to unknowingly buy a counterfeit product despite claiming they can recognize one.

An infographic based on the study and the full press release follow below.

“Most American consumers are unaware of the full risks associated with these potentially dangerous devices. Four in ten of the U.S. consumers surveyed don’t know counterfeit consumer electronics can harm them, and this lack of awareness leads to what Canon calls a ‘Confidence Trap’,” said Chuck Westfall, Technical Advisor, Professional Engineering & Solutions Division, Canon U.S.A, Inc. “Based on the survey, consumers seem overconfident in their ability to spot a fake, and as a result, are at risk of possible harm.”

Based on the survey results, 18 percent of U.S. consumer electronic purchasers surveyed say they have unknowingly purchased counterfeit consumer electronics this past year. Further, the study revealed, overconfident in their abilities, a significant proportion of consumers surveyed fell victim to counterfeit purchases, largely unaware that they could be putting themselves at risk of inferior product performance.

When it comes to purchase drivers, according to this, the majority of consumers surveyed overwhelmingly value product performance, quality, and safety when buying an electronic good. 82 percent of respondents cited product performance and 70 percent said product safety is important to them. It seems that purchasing counterfeits is therefore largely driven by a knowledge gap. For instance, close to half (45 percent) of consumers surveyed believe that a counterfeit product does the job just as well as the genuine product.

“One of the most significant revelations of this Anti-Counterfeit Study is our obligation to take action and educate consumers about the potential health and safety risks of counterfeit consumer electronics,” commented Westfall. “This research indicates that education can largely impact perceptions of counterfeit consumer electronics, and steer consumers away from making uninformed and misguided purchases. After learning about the facts, 71 percent of the U.S. consumers surveyed said that they were less likely to buy them.”

Canon is committed to bridging this education gap for the majority of American consumers who believe more can be done to combat the counterfeit consumer electronics market. Contrary to popular consumer belief, it is not exclusively the job of government, law enforcement or retailers to raise awareness. Prevention lies in the collaboration of all stakeholders and Canon is working to promote the continued education of consumers.

On April 23rd, Canon was also recognized by the U.S. Chamber of Commerce’s Global Intellectual Property Center at the 2nd Annual IP Champions Conference in Washington D.C. for its Anti-Counterfeit Consumer Awareness Campaign.

About Canon U.S.A., Inc.
Canon U.S.A., Inc., is a leading provider of consumer, business-to-business, and industrial digital imaging solutions. With approximately $36 billion in global revenue, its parent company, Canon Inc. (NYSE:CAJ), ranks third overall in U.S. patents registered in 2013† and is one of Fortune Magazine’s World’s Most Admired Companies in 2014. In 2013, Canon U.S.A. has received the PCMag.com Readers’ Choice Award for Service and Reliability in the digital camera and printer categories for the tenth consecutive year, and for camcorders for the past three years. Canon U.S.A. is committed to the highest level of customer satisfaction and loyalty, providing 100 percent U.S.-based consumer service and support for all of the products it distributes. Canon U.S.A. is dedicated to its Kyosei philosophy of social and environmental responsibility. To keep apprised of the latest news from Canon U.S.A., sign up for the Company’s RSS news feed by visiting http://www.usa.canon.com/rss and follow us on Twitter @CanonUSA.

†Based on weekly patent counts issued by United States Patent and Trademark Office.
i Based on a survey commissioned by Canon and conducted by Edelman Berland in November 2013 involving 1,069 U.S. adult consumers age 18 and older who said they had purchased consumer electronic products within the past year.