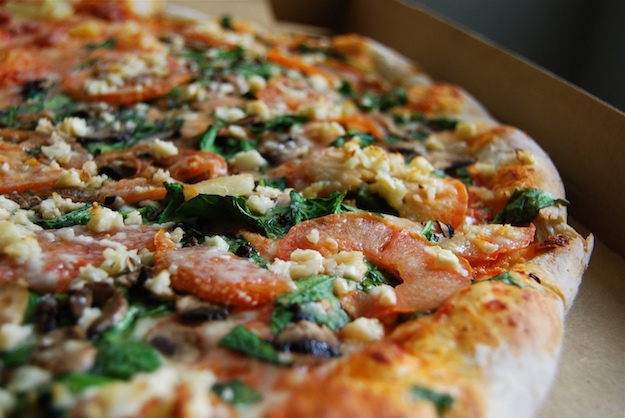 It’s funny how pizza culture varies from coast to coast, and even from city to city. Just ask a New Yorker and a Chicagoan about the pros and cons of New York style vs. Deep Dish and you’ll up all night listening to the two sides bicker.

Even the manner in which a traditional thin pizza is cut up into separate pieces can lend itself to an intense debate. While most people might instinctively say that cutting a round pizza into evenly shaped triangles is the best approach, there’s a vocal minority of pizza lovers who will fiercely argue that cutting a round pizza into small evenly shaped squares is the way to go.

But rather than being stuck at a metaphorical dead-end, mathematicians have created the perfect way to slice a pizza that should leave everyone happy. With the power of geometry at the ready, mathematicians Joel Hadley and Stephen Worsley a while back devised a way to slice and dice a pizza into 12 identical slices with a method called monohedral disc tiling.

Recently, Hadley and Worsley, of the University of Liverpool, took their pizza slicing research one step further and devised a way to cut a pizza up into any odd number of evenly sized pieces.

“Mathematically there is no limit whatsoever” to the number of slices a pizza can be divided into, Haddley recently explained to New Scientist.

Just imagine, for instance, pizza sliced up like this.

Okay, so maybe that’s not entirely practical, but who knows, if you’re bored or happen to have far too little pizza for a large crowd. You can check out Haddley and Worsley’s paper on the math behind their cutting technique over here.