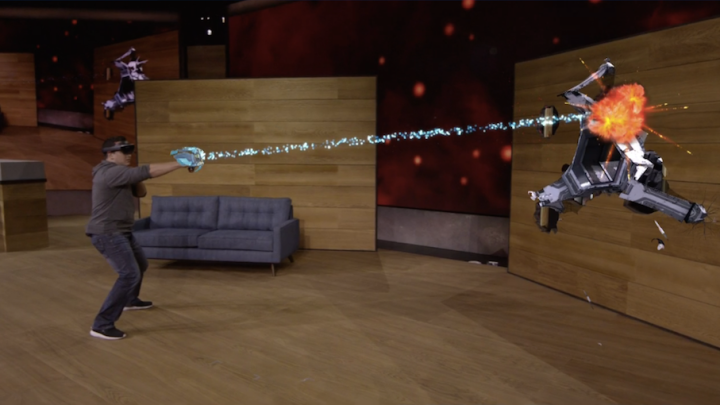 Microsoft’s event just kicked off, but we’re already seeing some incredible surprises in the form of a brand new HoloLens project that’s absolutely blowing our minds. Dubbed Project X-Ray, the demo had one player blasting through walls and fighting giant robots on stage at the event in NYC.

Holding a never-before-seen controller, the player was able to summon a holographic blaster over his hand which he used to shoot robots crawling out of the wall. The robots weren’t idle either — they shot back, and the player had to dodge incoming fire in order to stay alive.

This mixed-reality gaming is going to be an important element of the HoloLens experience, says Microsoft. We’re hoping to see plenty more demos like this in the coming months, especially as other VR headsets begin to approach their retail release dates in the coming months.

Additionally, Microsoft announced that the HoloLens Development Edition will be available for developers to purchase for $3,000 in Q1 2016.

The event is still going strong, so be sure to check out our live stream post if you want to know how to watch it live.