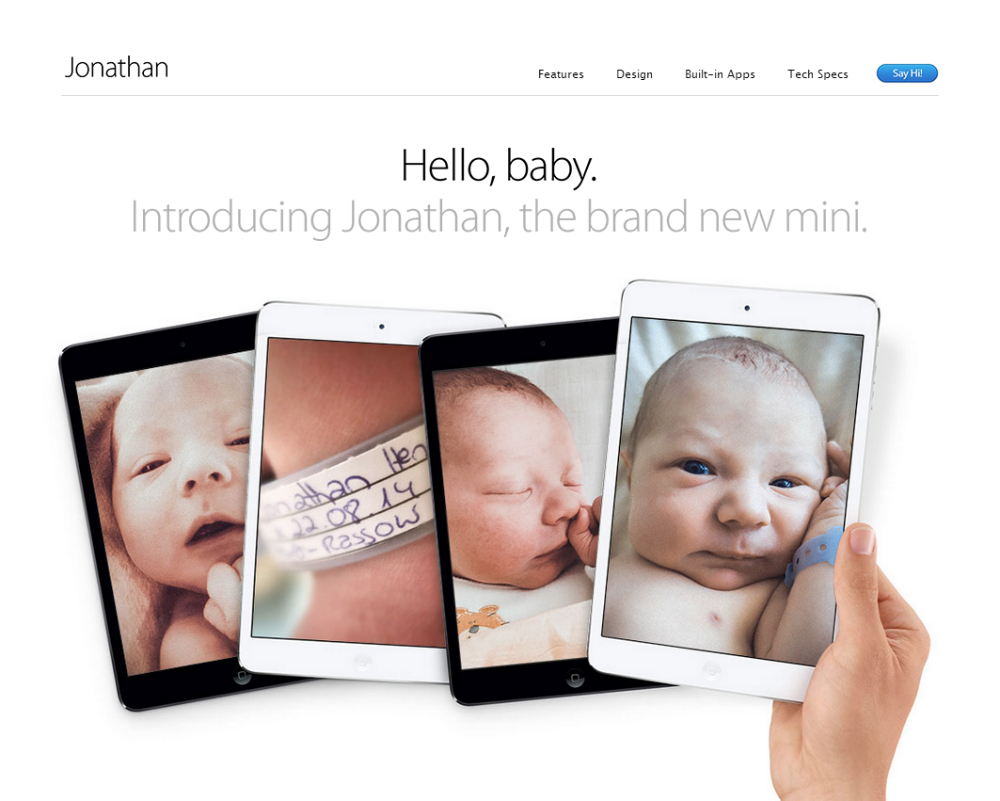 One of the things Apple is known for is its attention to detail especially when it comes to crafting marketing materials that sell its devices, including the elaborate “show” Apple puts on its website for highlighting the main features of a newly announced product. And what better way for a former Apple employee Andreas Kleinke to introduce to his baby boy to the world than by replicating Apple’s iPad mini page and replacing the tablet with his own mini, Jonathan Henry.

The announcement page is complete with the same kind of visual elements you expect to see on Apple’s site, as well as similar text to describe the new…. “product.”

“The brand new Jonathan (Mid-2014) features a 20-inch seamless unibody enclosure made from a single, solid block of beauty,” the page reads. “Ten meticulously aligned fingers deliver the perfect multi-touch experience. Plus, he comes fully equipped with not just one but two iSight cameras, each delivering images in stunning Retina resolution. Dual microphones on both sides catch every sound. And the centrally placed loudspeaker will simply blow you away, with maximum volume going all the way up to 120 dB.”

The page continues, “Don’t let his size fool you — the brand new Jonathan packs enough power to last a lifetime. With only 5% the weight of his predecessor, he is easy to carry around all day. Of course there’s lots of room to grow, and you can look forward to frequent software updates: new apps like iWalk and iTalk will be downloaded and installed automatically when ready, free of charge. For the moment though, we’ll just enjoy his super-portable, hold-in-one-hand, just-right mini size.”

The operating system on the new mini is “non-Android (thank God)” and the “device” comes with just four apps pre-installed including iEat, iSleep, iPoop and That’s it, with more promised for the future.

Images from this clever, and hilarious, baby profile follow below – to view the baby’s full Apple-styled page follow the source link, although the viral page may currently be down due to heavy traffic load.