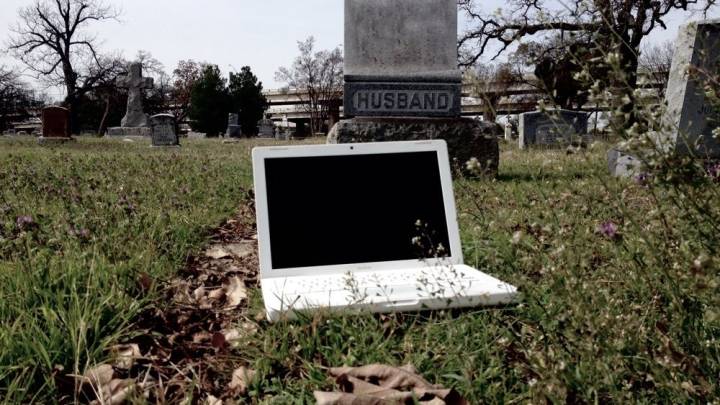 I’m no medium, but I’m pretty sure that ghosts have better things to do than haunt decade-old laptops. But it doesn’t matter what I think — according to eBay seller wfatzinger, his white, 2007 MacBook is haunted. In fact, it’s so haunted that he felt the need to put “(VERY HAUNTED)” in parentheses next to the title.

DON’T MISS: Here’s how to get 102GB of free cloud storage right away

The first question you’re probably asking yourself (one of many, I’m sure) is “How does this man know that his computer is haunted?” This is his version of the story:

“Well, I took the computer home (still in perfect working condition) and, folks, this is when things started to get downright weird. First, I noticed that ALL of my songs in iTunes had become scary or haunted. Second, the desktop background was changed to a scary photo. The following week, we (my wife, Barbie, and I) noticed some of our stuff around the house had been mysteriously rearranged.”

Still not convinced? It gets even creepier:

“One night, we went out to dinner with my wife’s parents and their friends and some people from my wife’s work and some of their parents. When we came home, my baseball cards were all out of order and my wife’s rare American coins were in total disarray. To make matters spookier, I occasionally saw the computer levitating. In some cases the screen and keyboard would open and shut quickly, as though the computer were attempting to speak.”

There’s plenty more background on eBay if you’re looking for the whole story. Oh, if this laptop could talk. Which it might be able to — we’re still not entirely clear on that.

If you do win this otherworldly auction, you’ll get not only the MacBook, but also a Certificate of Haunting (signed by the current owner), the haunted music in his iTunes library, some ghostly photos, Edgar Allen Poe text documents, writings from the actual ghost itself(!) and some of the owner’s “better” sketches.

But you’ll have to act fast! The auction started at $75 on Sunday and has already climbed to $358 at the time of writing.