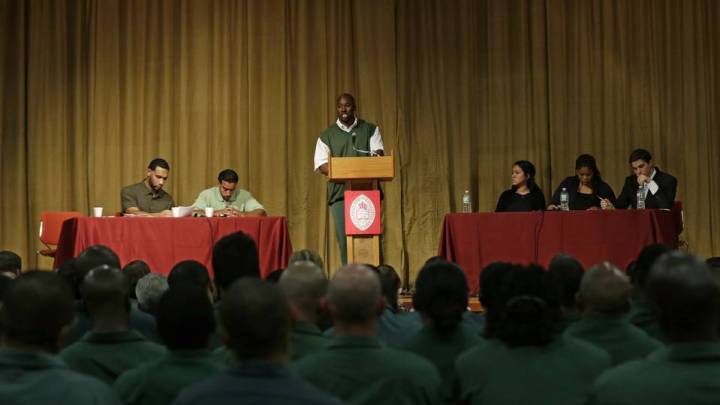 You’d think that Harvard’s national debate champions would be able to win any verbal confrontation they’d be involved with, especially when it comes to debating. But you’d be wrong to assume that. Even the best lose sometimes, and Harvard’s loss is all the more surprising when you learn that a team of inmates from the Eastern New York Correctional Facility managed to outperform the Harvard’s best and brightest.

As The Telegraph reports, three men convicted of violent crimes including manslaughter faced three opponents from Harvard, arguing a motion that they apparently disagree with.

The three inmates were given a difficult task – argue that public schools should be allowed to turn away students whose parents entered the U.S. illegally – and impressed the judges, beating the Harvard team in the process.

The convicts argued that by turning students away, public schools would actually help non-governmental organizations and wealthier schools that could step in and provide a better education to the children.

The Harvard team said it didn’t go soft on their unlikely opponents, treating them with the same respect they would any other debate team.

“That would have been incredibly disrespectful of their talent and work,” president of the Harvard College Debating Union Dhruva Bhat told Boston.com.

While the victory against the Harvard team is their biggest achievement to date, the inmates beat others in similar duels in the past two years, including US Military Academy at West Point and the University of Vermont.

The inmates’ debating team is a project from the Bard College, which operates in six New York prisons.

“Students in the prison are held to the exact same standards, levels of rigor and expectation as students on Bard’s main campus,” executive director of the Bard Prison Initiative Max Kenner said. “Those students are serious. They are not condescended to by their faculty.”

“We might not be as naturally rhetorically gifted, but we work really hard,” 31-year-old inmate Alex Hall told The Wall Street Journal.