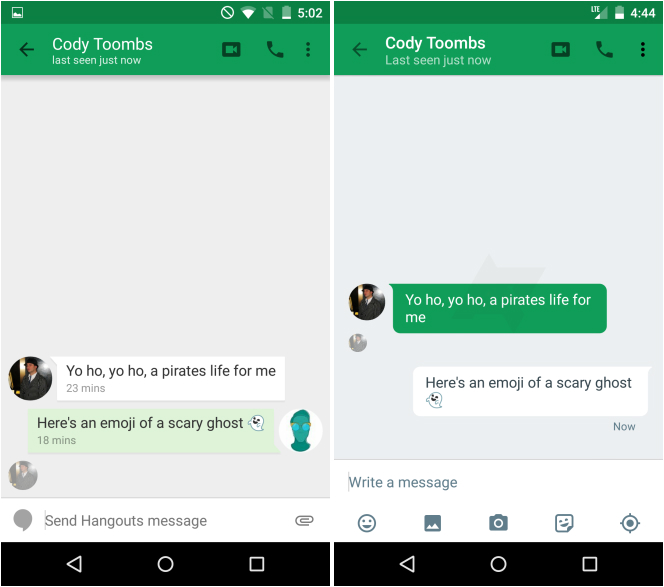 Google’s Android messaging application is getting a well-deserved update which should fix several design and user interface complaints. A first look at Hangouts 4.0 reveals that various changes are in the works to improve its overall layout and structure, although a release date for it isn’t yet available.

DON’T MISS: iOS 9 vs. Android M – The future of mobile in side-by-side pictures

The app isn’t available just yet, but Android Police has already gotten access to Hangouts 4.0, explaining its most important features supposed to finally “fix” it.

Other design changes include the removal of the trash can icon when managing conversations, and a new way of reminding a user that notifications are muted for a certain conversation. A new status option lets users set their status, which will be seen by their family and friends who are also using Hangouts.

According to the Android fan blog, the design of the actual chats has also been “tidied up.” Outgoing messages are now white, and incoming messages are green, all having rounded corners. Your avatar doesn’t appear in the chat windows anymore, and time stamps aren’t included with every message anymore, appearing sporadically throughout the chat. Long-pressing the avatar of the other people in a chat will get you details about a message. In case SMS is enabled, a dropdown menu will appear on the left side of the message box to select between messaging options.

Attaching items to messages, including images, stickers, emojis and others, is also easier in Hangouts 4.0, as users will have access to an entire row of options rather than just a paperclip icon.

Finally, the tablet version of Hangouts is yet to receive a proper tablet user interface in version 4.0, although the app is not yet launched, so things could changed.

Hangouts 4.0 isn’t available for manual download just yet, and it’s not known when Google will roll it out – head over to the source link to view more images showing the aforementioned changes.