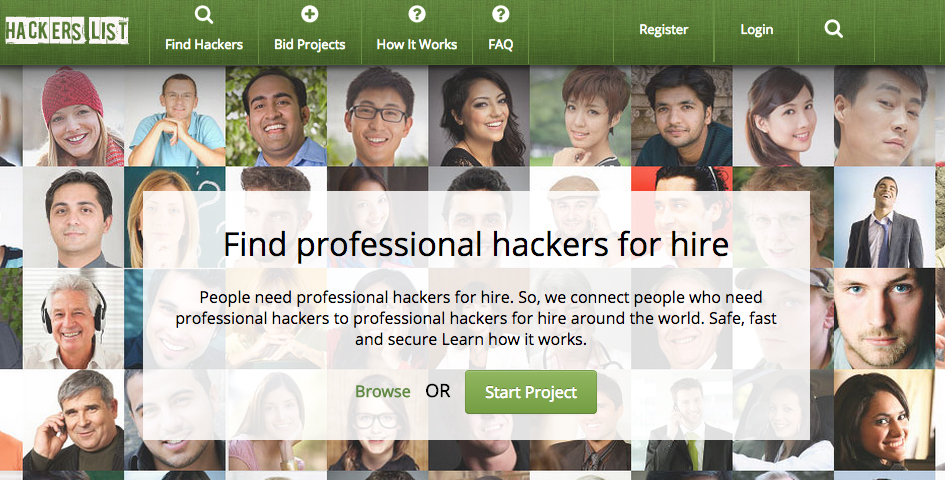 Ever wanted to get access to your spouse’s Facebook account without them knowing? Are you looking to order some shady products from the “deep web?” Interested in clearing your record, or improving your grades? There’s a hacker for that, or at least a site where you can list such requests and appropriate rewards, hoping that hackers will be interested in helping out.

FROM EARLIER: How to hire a hacker

Needless to say that such activities aren’t necessarily ethical and/or moral, but Hacker’s List is filled with various requests for hacker services, and the service became more appealing to regular Internet users, Ars Technica reports, after being profiled in The New York Times a few days ago.

In what follows, you can read some of the crazy requests some people made on Hacker’s List, some more noble than others.

“I am in a custody/safety situation with my three-year old daughter and my alcoholic ex-husband,” one listing says. “He continues to defy safety restrictions and court orders, and I need to be able to know where he is in order to catch him drinking in her presence. (he still has visitation). I have his cell information as well as two email addresses. I want to be able to track his phone. If I could monitor his text messages/calls it would also be useful in court. (I know information gained in this manner would not be [?], but it could be crucial in a case).” $200 to $300 would be this gig’s budget.

“Tel-Aviv university decided to close its preparatory program for disadvantage youth, after 45 years helping poor youngsters,” a different message reads. “I would [like] a message supporting the continue of the operation of the program to be posted on the TAU website.” The hacker getting this one done would be entitled to a reward from $300 to $500.

“Scumbag guy I met at a bar over the weekend followed me home and assaulted me,” a different listing reads, offering between $200 and $300 as a reward for access to the account. “Thankfully the police caught him and he’s thinking long and hard about what he did in a county jail. This is apparently not the first time he’s done this, but he got off free of charge the last time. I want to hit him where it hurts.”

“Retrieve Gmail password from fiancé, the father of my child, to find out whether he’s cheating,” one woman wrote, willing to pay anywhere from $40 to $400 to have it done.

“Hello to every body [sic]. I am looking for someone who can give me the list of all conversation on whats app of my girlfriend’s account and if it is possible to get her SMS or incoming/outgoing calls and her location….. so this mean maybe a spy ware,” a different listing reads, alongside a $500 to $2,000 budget.

“I’ve been getting malicious emails from an anonymous sender,” one job listing reads. “They keep creating new gmail accounts and sending me and my family emails about me to make me look bad. They also created a fake facebook account in my name and starting writing bad things about me. Facebook ultimately took down the site. I’ve also received calls and texts from several unrecognized numbers. I think its one person who is doing this to me. I really need to figure the name and location of the person,” the project says, having a $300 to $500 reward.

“For some reasons, I am looking for a hacker who can help me to enter the game server, identify my character, and modify a number,” an avid gamer, willing to spend up to $3,000 for this particular chore, wrote. “Whoever can make it, I am willing to pay high rewards. Please kindly contact me for the further details. Thanks!”

More similar strange jobs for hackers are available at the source link.