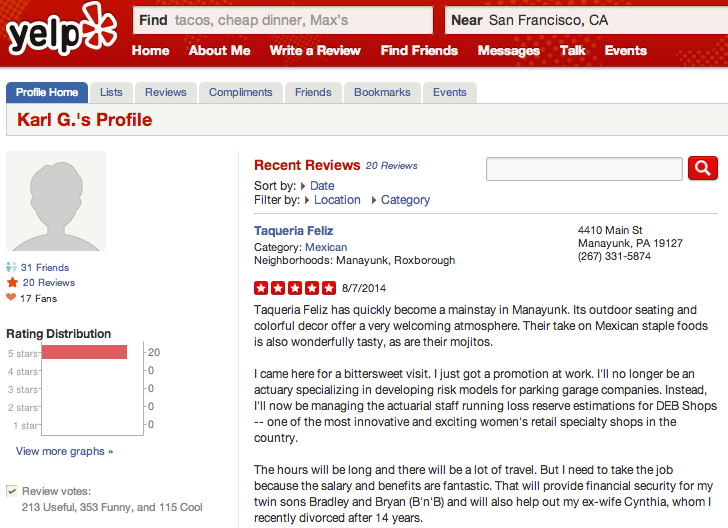 A comedian is posting reviews on Yelp that are part of a bigger scheme, Grub Street has discovered. Instead of writing simple reviews for the places he visits, Gregg Gethard a.k.a., “Karl G.” writes stories that are part of a novel.

Karl G. is an actuary who works in risk management for a parking-garage, and he shares his life’s story on Yelp while reviewing various places in Philadelphia. In addition to offering details about the places he hangs out in, he’s talking about his divorce from Cynthia, his kids, his wife’s new love, his new relationship to Tonya M. – a woman who spent 18 months in prison for voter fraud – and his new cat “Dog,” among other things.

“Taqueria Feliz has quickly become a mainstay in Manayunk. Its outdoor seating and colorful decor offer a very welcoming atmosphere. Their take on Mexican staple foods is also wonderfully tasty, as are their mojitos,” Kyle G. begins a Yelp review written on Thursday, soon taking a turn to a new problem.

“I came here for a bittersweet visit. I just got a promotion at work. I’ll no longer be an actuary specializing in developing risk models for parking garage companies. Instead, I’ll now be managing the actuarial staff running loss reserve estimations for DEB Shops — one of the most innovative and exciting women’s retail specialty shops in the country,” he says, explaining what the promotion means for his current post-divorce life.

His review then ends with a recommendation for Taqueriea Feliz.

“I would recommend Taqueria Feliz to anyone in the Manayunk/Roxborough area to celebrate a work promotion but ends up talking about the importance of providing for his twin sons at the expense of personal development and ends up breaking up with his new girlfriend,” he says.

Interestingly, all his reviews – which are available at the source link below – have a five-star rating. So far, his 20 reviews are quite appreciated on Yelp, as 213 people found them Useful, 353 thought they are Funny, and 115 users said they’re Cool.