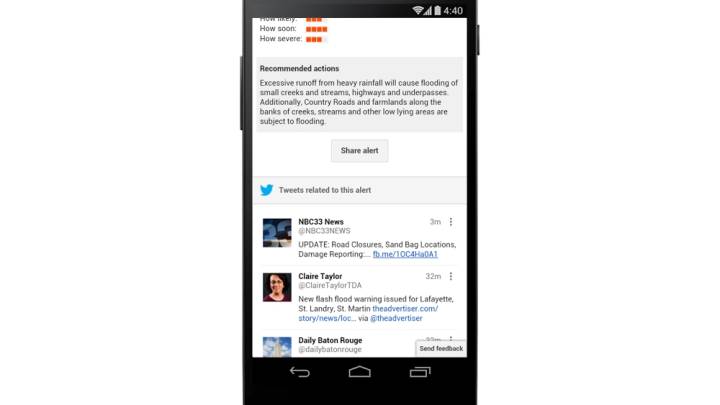 One of the most fascinating trends in recent years has been the increasingly important role Twitter plays in news coverage. From storms and tragedies to elections and celebrations, the commentary of every individual with a Twitter account is just a few clicks away, so Google is teaming up with the social network to begin including tweets in its Public Alerts service during times of crisis.

“Starting today, you can find relevant data from Twitter on a subset of Google Public Alerts.” Google says We launched Public Alerts to provide updates from official sources, such as the National Weather Service, via Google Now, Search, and Google Maps. Now, some of the more extreme Public Alerts will include Tweets to help answer important questions: are schools closing? Are neighbors evacuating? What are people seeing on the front lines of a storm?”

The key to this initiative becoming a success will be Google’s ability to sort through the noise for legitimately helpful tweets from news stations, community members and others who are on the scene during an emergency. We’ve seen far too much misinformation in very high stress, and potentially dangerous, situations in the past few years — if Google can streamline the process, we might be able to nip misinformation in the bud.

Only English-speaking regions will have access to the relevant tweets for now, but Google is planning to expand the program in the future. You can see an example of how the Public Alert page will look in the picture above.