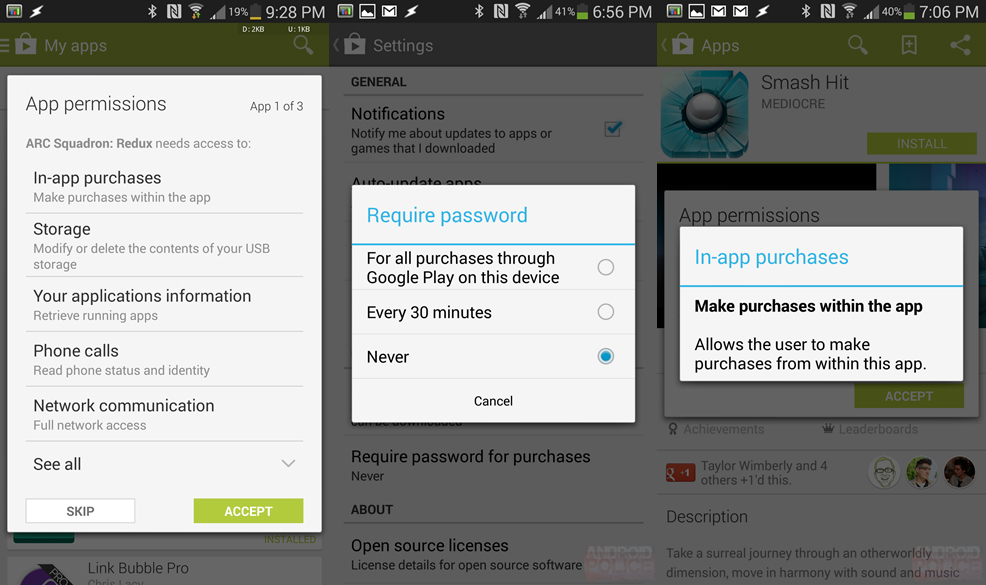 Just like Apple but on a smaller scale – at least for the time being – Google has been hit with an in-app purchase related lawsuit recently, prompting the company to issue an update for its Google Play Store that brings a fix to this potential content purchasing issue. Android Police was the first to spot the Google Play Store 4.6.16 update, which brings a new “Require password” option that, when turned on, will always require the account password for purchases. Otherwise, the 30-minute purchase window will still be available once an application is acquired.

Furthermore, an in-app purchases indicator now appears in the “App permissions” screen, notifying users that a certain Android apps will offer such content.

In addition to this new feature, the new update also brings a batch install feature in “My apps” allowing users to quickly install applications on a new device. The “Settings” and “Help” menus have been moved to the slide-out navigation drawer, while the “Auto-add” widget setting has renamed to “Add icon to Home screen.”

A few cosmetic changes have also been made, including the account name which now appears in bold, a white border around the Google+ picture, and a new account selector interface. Exact Google+ +1 counts are now shown for apps as well, and Google added the continuous app verification security feature that was recently mentioned.

Finally, a new self-updating action can be triggered from inside the new Google Play Store app version.

Android Police has the APK file for Google Play Store 4.6.16 available for download