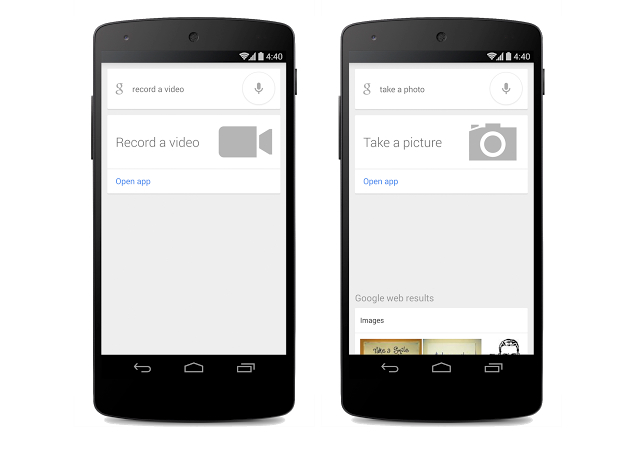 Google on Wednesday updated its Google Search / Google Now app for Android with new voice commands that will supposedly let users take pictures and record videos even faster. Instead of looking for the camera app, users will be able to say one of the two new commands, including “Ok Google, take a photo,” and “Ok Google, take a video,” to quickly launch the appropriate camera mode.

“The first home run in T-ball, the surprise proposal, or just that gorgeous sunset… Sometimes the perfect photo passes you by as you fumble with your phone to open the camera app,” Google wrote on Google+. However, the new voice commands will not actually take a picture or start recording a video. They’ll simply launch the camera in the preferred mode, with the users having to actually press a button to “snap those shots.”

The update may not necessarily offer faster access to the camera, and may be more useful on devices that have always-on listening features enabled than on others, but these new features may make more sense for Android Wear devices in the future, as they could let users initiate actions on a phone by saying the appropriate commands into a smartwatch or other smart wearable device.