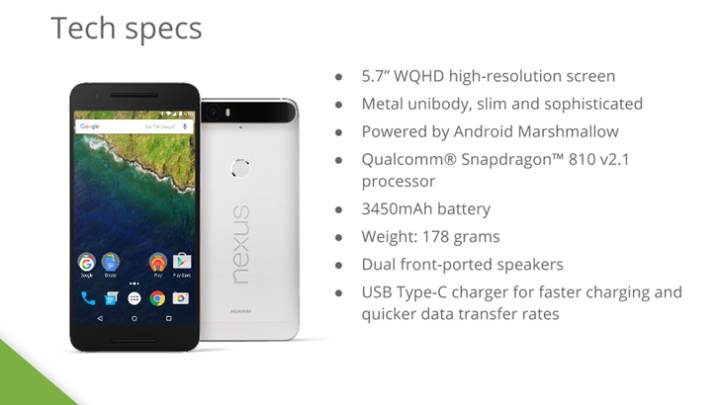 Google will unveil a new line of exciting Nexus smartphones on Tuesday, including a 5.2-inch LG Nexus 5X and a 5.7-inch Huawei Nexus 6P, both supposed to highlight some of the main features that will be available in Android 6.0 Marshmallow. Both devices have been thoroughly described in a significant number of leaks, all suggesting that one of them will be an expensive high-end handset, with the other supposed to be a more affordable sub-flagship device.

Over the weekend, a new leak showing an entire presentation for the new phablet seems to indicate the Nexus 6P will indeed become the best Nexus handset money can buy and Google best Nexus device yet.

The leaked training slides that were posted on Imgur indicate the smartphone will have a metal body and a 5.7-inch WQHD AMOLED display (2560 x 1440 and 518ppi), Qualcomm Snapdragon 810 processor, 3GB of RAM, 32/64/128GB of storage12.3-megapixel rear-facing camera, 8-megapixel selfie camera, 3,450 mAh battery and Android 6.0 Marshmallow.

Pricing details for the handset aren’t mentioned in the training manual that was leaked online, but Google will reveal more details about the high-end handset during its special September 29th media event. The documentation (see the slides below) indicates the phone will be less expensive than its direct competitors like the iPhone 6s Plus though it’s not clear what that means.