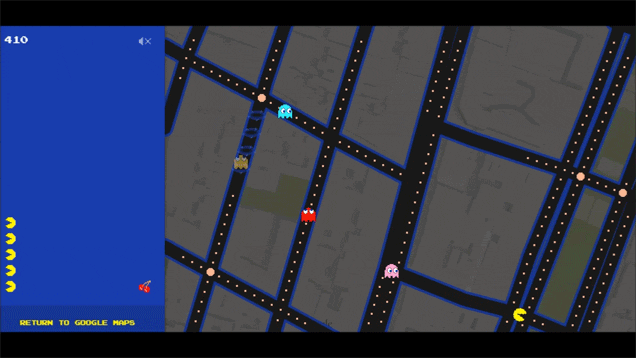 April Fools Day is coming Wednesday but Google has already gotten a head start on its planned pranks by adding an awesome new feature to Google Maps that will let you turn your entire neighborhood into a giant game of Pac-Man.

As Kotaku reports, you can access this new trick by zooming into a given neighborhood and then clicking on the Pac-Man icon in the bottom left-hand corner of your screen. Google will then impose an overlay of Pac-Man onto your neighborhood’s street layout and it’s your job to safely guide Pac-Man through your streets while evading ghosts and eating pellets.

You can use your keyboard’s arrow keys for controls, although these controls get a little difficult to figure out on streets that feature lots of different angles and unexpected turns. You know, like the vast majority of streets in Boston. However, if you live in a city like New York or Philadelphia that’s reasonably designed like a grid, we imagine the controls get a lot more intuitive.

While we personally dread April Fools Day as the most annoying single day on the Internet, at the very least Google usually gives us something amusing to do with its April 1st gags. In 2012, for instance, it used Google Maps to deliver 8-bit maps of the United States that looked like they came straight out of Zelda II: The Adventure of Link.