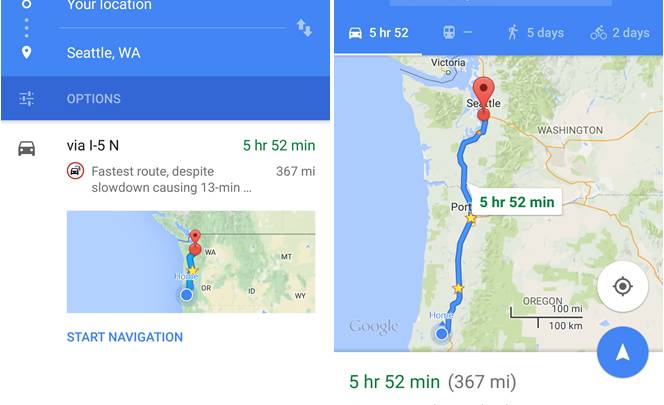 Google continues to release new features for the Android version of its Google Maps application. After bringing Street View to Google Maps on Android only a few days ago, the company is out with software version 9.14, which includes a welcome update to the navigation user interface that should further improve your overall Google Maps experience.

DON’T MISS: This versatile 15-in-1 Travel Jacket is Kickstarter’s most funded piece of clothing at $7.2M

As you can see in the image above, via Android Police, Google’s minor UI change is pretty significant. In the navigation screen, the small map that’s used to show you departure and arrival points has been blown up significantly. Now you can zoom in on it, and seek alternative routes, just as you would when browsing through maps inside the application.

The cleaned up UI ditches the unnecessary screen waste, making the most of a phone’s display. All the information is neatly provided just like before. You get to input your departure and arrival locations and choose how you’re planning to travel to your new destination (driving, public transportation, walking or biking). The UI shows you the time to get there, the distance and the fastest route information.

Additionally, a “popular times” feature should help you better plan eating out at a particular restaurant, as Google Maps now shows you when that location is most likely to be busy.

Google Maps for Android version 9.14 should be available from the Google Play Store, but just in case you still haven’t received the update, you can apply it manually after downloading it from here.