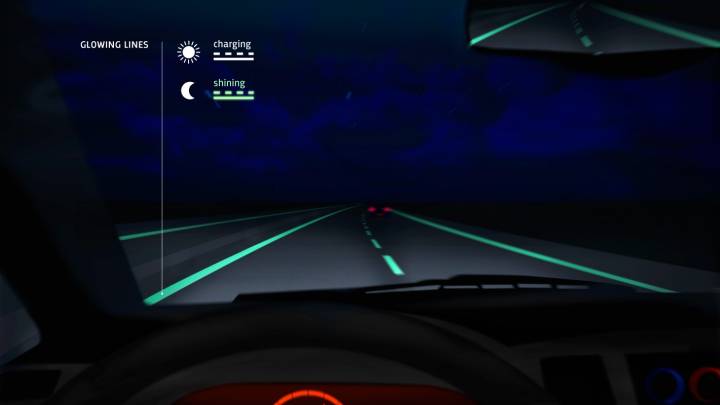 Dan Roosegaarde is tired of our stagnant pavement. Our roads have remained unchanged for decades, which inspired Roosegaarde and his team at Studio Roosegaarde to innovate in the form of glow-in-the-dark road markings. Wired.co.uk has drawn our attention to these fluorescent markings, which have replaced the prototypical street lights over a 500m stretch of highway in the Netherlands, providing a cost-efficient alternative that doesn’t require electricity and looks pretty amazing to boot.

Studio Roosegaarde collaborated with construction group Heijmans to make a photo-luminescent powder that has been integrated into the paint, emitting an almost radioactive display of color at night. According to Dutch News, the paint absorbs light during the day and then glows for up to eight hours after the sun goes down.

When Wired.co.uk first spoke to Roosegaarde back in 2012, he had a grand vision for the future of road travel:

“One day I was sitting in my car in the Netherlands, and I was amazed by these roads we spend millions on but no one seems to care what they look like and how they behave. I started imagining this Route 66 of the future where technology jumps out of the computer screen and becomes part of us.”

The luminescent road markings are only a small part of his vision, but the mere fact that the government was willing to implement them in the first place is a very good sign.